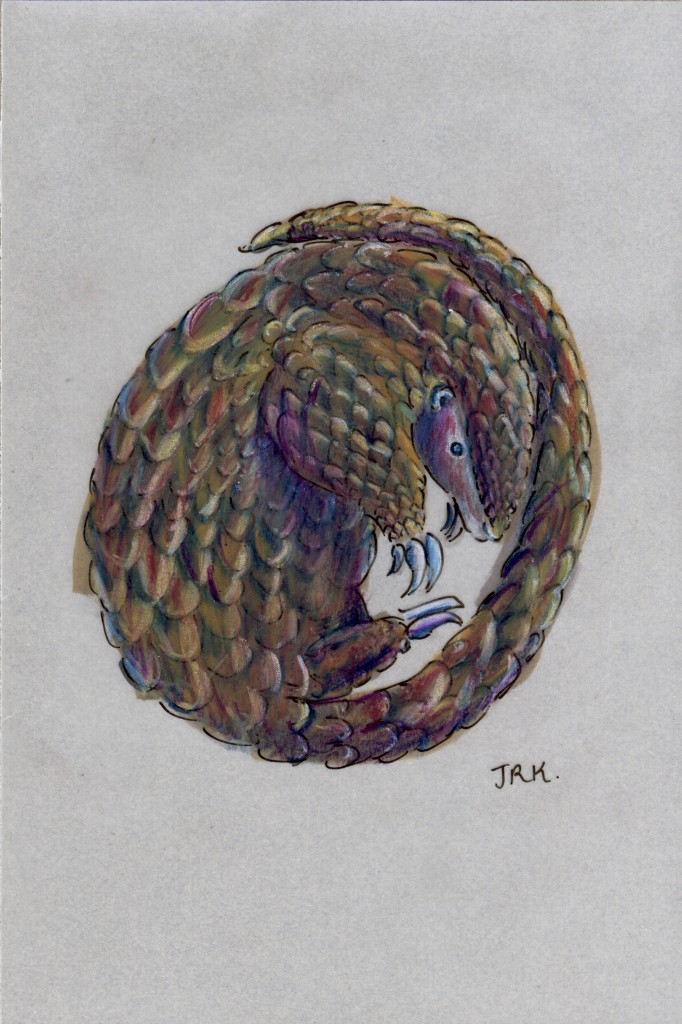 Representing the Ivory Coast in the mammalian World Cup is this scaly, piny fellow, the tree pangolin. Like the anteaters of South America, the pangolin has evolved to have a long tongue and no teeth, adaptations that let it concentrate on eating ants. And like the armadillo, it has evolved a protective armor, in this case sharp scales that stick out of its thick skin. When threatened, the pangolin curls up in a tight ball that looks like a particularly round pinecone. Tree pangolins, like this one, have long, prehensile tails with a bare patch of skin at the end so they can use them to get a good grip on tree branches and swing upside down.

Sadly, the tree pangolin’s numbers are declining because of hunting for bushmeat and traditional medicine (its scales, of course, are considered an aphrodisiac, because someone considers every unusual part of any animal an aphrodisiac, it seems to me). The IUCN currently lists the species as near threatened; endangered is the next rung down the ladder to extinction.

The tree pangolin’s genus name, Manis, comes from the word manes, which is the ancient Roman word for spirits of the dead. The species name, tricuspis, does not denote teeth, as I had reckoned, but means “three points” and refers to the shape of the scales. Our bicuspid teeth, I guess, must have two points.

The Ivory Coast gives us a good chance to talk about an aspect of soccer we haven’t discussed: faking, diving, acting, flopping. In soccer, as in none of the major American sports as far as I know, players will pretend to be far more injured than they are in order to persuade the referees to call a foul against another player. One such foul, unless it’s especially egregious, will draw a yellow card, which is a sort of warning. Two yellow cards equal a red card, and a player who gets a red card is sent off the pitch, leaving his team down a man for the rest of the game, and is not allowed to play in his team’s next game.

In the Ivory Coast game against Brazil in this World Cup, there was a spectacular instance of diving, which is what this injury-faking is called. Brazil’s star, Kaká, gently jostled an Ivorian player named Kader Keita somewhere in the abdomen, and Keita fell to the ground clutching his eye, writhing in agony. Kaká had previously drawn a yellow card, and Keita’s lousy acting somehow convinced the ref to give Kaká the red card now, meaning Kaká was sent off and Brazil had to play with 10 players. It didn’t make the difference for Ivory Coast, though: they still lost 3-1 and did not advance past the group stage of the tournament. If you watch this video of highlights from the game, you can zip up to about 1:30 (after a 10-second ad) and see the star of the Ivory Coast team, Didier Drogba, make a really neat goal with his head, immediately followed by the Kader Keita-Kaká fracas.

Coco also drew a tree pangolin for us. 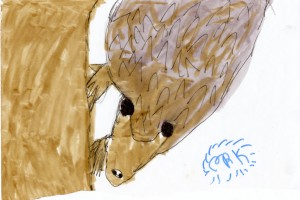 The tree pangolin is the first mammal from Group G, but I forgot to do the Group F results in the last post, so let’s do it now. Group F was the Alpine ibex from Italy, the black-and-gold howler monkey from Paraguay, the New Zealand lesser short-tailed bat, and Slovakia’s Tatra chamois.

When another group had a bat, I speculated that the bat would just fly away from the pitch, earning it either a draw or a forfeit. But the fact that this bat is evolving into being a ground mammal means it has the kind of adaptability that wins games. I think it could beat these other mammals. Of the others, the Alpine ibex’s horns are bigger and more threatening than the chamois’, and I think either of their sharp hooves could defeat the monkey. So the two teams from Group F that will continue on to the Round of 16 are: