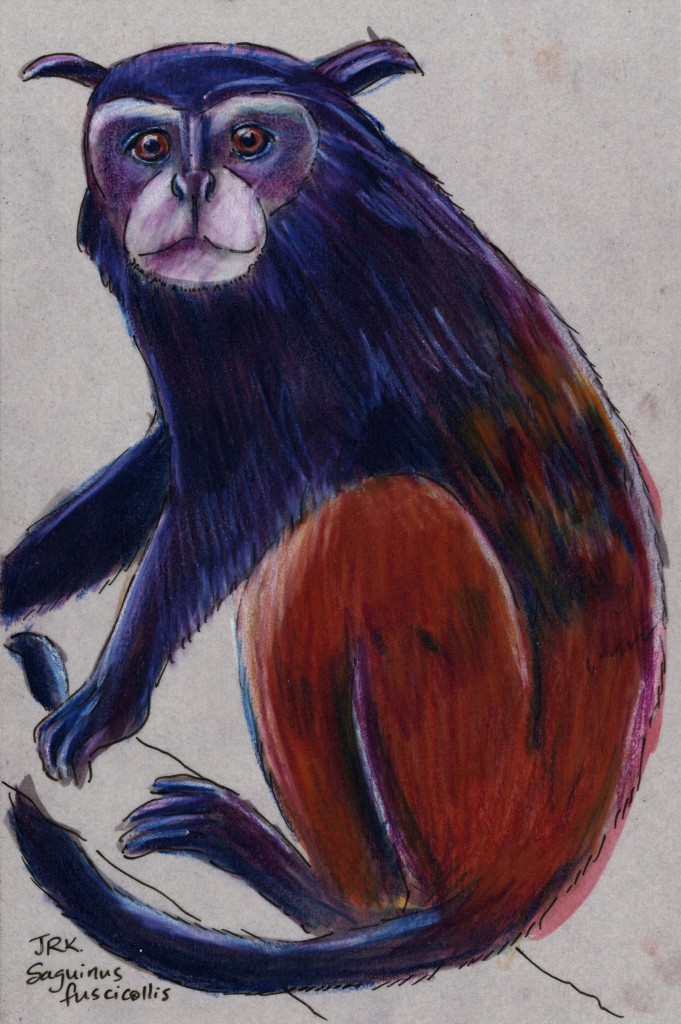 I’ve decided to go ahead and call this an official theme week. This is the fifth and last entry in our Daily Mammal Mating Week. The saddleback tamarin, which lives in Bolivia, Brazil, Colombia, Ecuador, and Peru, practices polyandry, which means that a single female mates with more than one male. (Polygamy technically refers to a marriage or partnership with more than two partners; polygyny means one male and two or more females. Other members of this tamarin’s taxonomic family also practice polyandry.)

A typical group of tamarins includes one mating female and at least two males, but they’re flexible about their family systems, and sometimes they’re in a monogamous pair accompanied by adolescent offspring or in a group that includes other, non-dominant females, whose ovulation is suppressed and who help take care of the dominant female’s babies, who are nearly always born in sets of twins. All the males take turns mating with the dominant female, and Walker’s Mammals of the World says that “tamarins generally display minimal intragroup aggression, with a marked degree of cooperation and tolerance, even by sexually active males towards one another.” It’s a nice system:

In Saguinus the father and sometimes other adult members of a group assist at birth, receiving and washing the young. The newborn have a coat of short hair and are helpless. They cling tightly with their hands and feet to the body of the mother or father. The father transfers the young to the mother at feeding time and then accepts them from the mother again after feeding…Several members of a group besides the mother and father may help carry and provision the young…

So that’s it for our Mating Week. In addition to today’s polyandrous group, we’ve visited a lek, a barbaric “rape society,” a monogamous pair, and a “big-bang” reproducer. We mammals find what works, and the diversity in that is pretty beautiful.