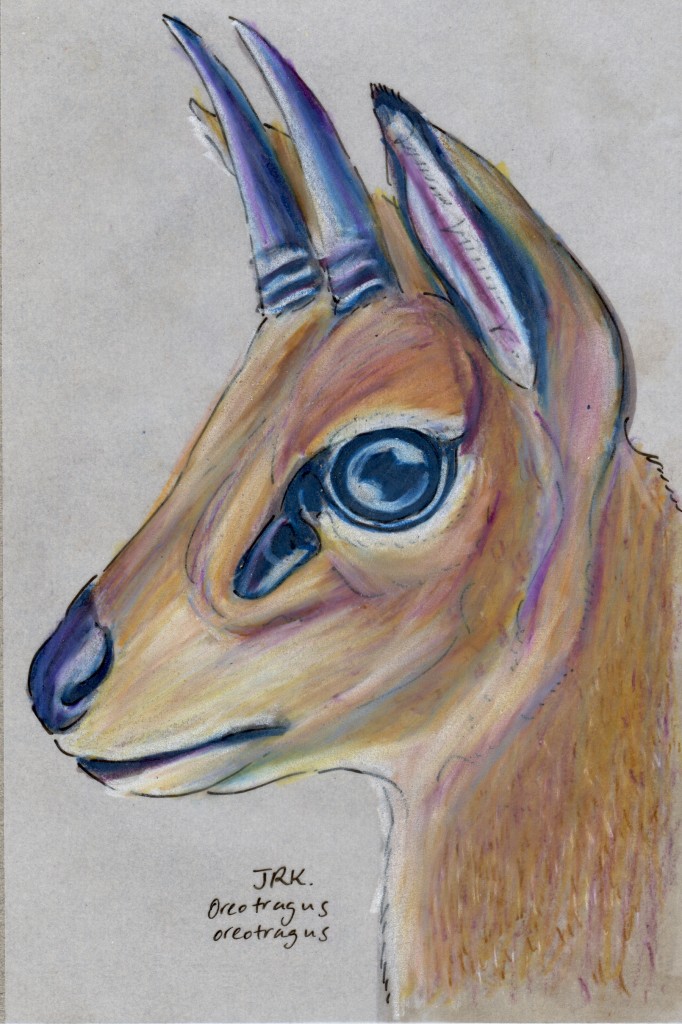 The klipspringer is a little-bitty antelope that lives in eastern and southern Africa on rocky cliffs. I originally picked it for my planned Mammal Mating theme week because it is a rare example of a monogamous mammal. (Most birds are monogamous; most mammals are not.) And what’s interesting is why it’s monogamous. And I also find it interesting that we humans—just apes, really—are able to reason out why other animals do things by analyzing their behavior and habitats and things like that.

Klipspringers are monogamous because monogamy gives them their best chance at avoiding predators. Most small mammals avoid predators by what’s called crypsis—either camouflaging themselves or hiding—or by running away. Klipspringers avoid predators by climbing up onto clifftops where it’s hard for predators to get and where the klipspringers can watch for trouble. But their food is at the base of the cliffs, and if your head is down and you’re eating, it’s easy for a lion to sneak up on you.

So klipspringers pair off—one male and one female—and take turns being lookout while the other eats. The female has to eat more, and also has to bear the children, so the male spends more time and energy watching for predators. The male’s increased alertness allows the female to be more relaxed and concentrate on reproduction and raising her babies. It’s also the male’s job to make sure the female never gets too far away—usually within five meters. She just munches along, knowing that he’ll keep track of her and let her know if trouble is near. (This is also more or less why I got married.)

It makes sense that a pair is the best size group for this. A male with a harem herd would have trouble keeping track of so many gals, and a large herd of males and females wouldn’t be able to so easily get up on the cliffs and away from danger. And a pair of females would both have to eat more to support reproduction and baby-raising, so neither of them could concentrate on guarding.