All week, my daughter Coco and I are selling our drawings of Japanese mammals to raise funds for Japan! If you buy one of them, whether matted or unmatted, your entire purchase price will go to help those affected by the earthquake and tsunami: half to the American Red Cross, half to Animal Refuge Kansai, a Japanese animal shelter taking in homeless pets. Please help, and please send your friends by, too! 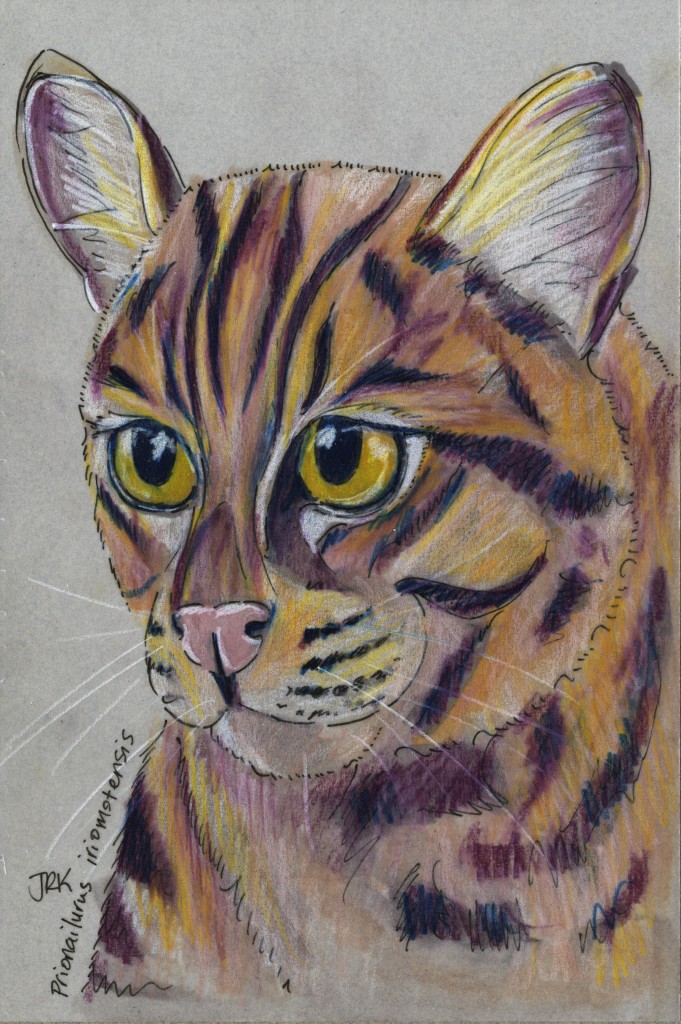 This drawing has sold!

This cat may be the rarest feline species on the planet. There are only about 100 individual Iriomote cats living, and they’re found only on the Japanese island of Iriomote, which is just east of Taiwan. It’s an island that’s made up almost completely of impenetrable forest and home to some 2,000 people. Unfortunately for the Iriomote cat, the people like the same part of the island it does, and their highway goes right through the cat’s habitat. Despite efforts to protect the rare cat from harm, about four cats a year become roadkill. They’re also threatened by their habit of interbreeding with feral domestic cats, instead of mating only with each other.

Iriomote cats are quite elusive. They’re solitary and mostly nocturnal, and some researchers who dedicate their lives to studying them still go years without seeing one. According to this great article from The New York Times, some residents of Iriomote don’t even believe the wild cat exists. 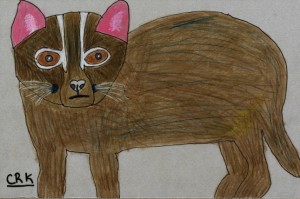 I said that this cat may be the world’s rarest feline because it’s been part of a taxonomic controversy almost since it was first described in the 1960s. Back then, scientists theorized that it was a “living fossil” species, the only existing member of an extinct group of cats. Then, other scientists decided it was actually a subspecies of the leopard cat, which is pretty common on the Asian mainland. Then it was back to being its own species, but in the same genus as the leopard cat, not in its own “living fossil” genus like before.

None of that ever got settled for sure, and now it looks like some people are leaning back toward the leopard-cat-subspecies idea. It seems that the International Union for Conservation of Nature and Natural Resources considered it its own species until just a few years ago, but now the IUCN lists it under the leopard cat species, even though none of my other sources do.

This is important because the IUCN’s Red List is widely accepted and used as a definitive list of endangered species worldwide. Perhaps if I do a little digging in the records of the IUCN’s cat study group, I can find some of their reasons, and I may do that when I have the time. It’s good to remember that the designation of endangered species is dependent on many actors other than just counting how many cats there are that look alike.

If you’d like to help Japan without buying a drawing, click the Donate button below and we’ll add your contribution to our people-and-animals fund. And we still have two monkeys and one squirrel available for sale. See you tomorrow!