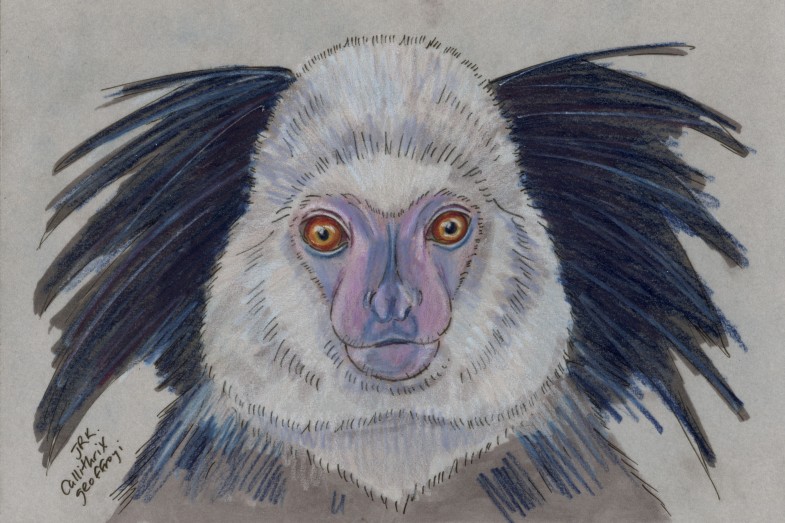 I’m unhappy with this marmoset drawing. The eyes are too far apart. But I had already spent a very long time working on a composition that showed the beautiful feathery tortoiseshell fur on the marmoset’s back, and it just didn’t work, and I had to finally just draw something, no matter how unsatisfactory, so here. (I blame the Lefty Frizzell I was listening to. It went a little better when I switched to Emmylou Harris. Except her album has a song about Lefty Frizzell, which probably explains why I still didn’t get into the groove. Lefty Frizzell isn’t good mammaling music, it turns out.)

This is the latest mammal for us to meet in Geoffroy week, which features mammals named after Étienne Geoffroy Saint-Hilaire, a French naturalist who lived in the 18th and 19th centuries. This marmoset was named by Baron Friedrich Wilhelm Heinrich Alexander von Humboldt, a fancy Prussian naturalist. Humboldt Bay, on the northern California coast, is named for the baron, and Humboldt County is named for the bay. There is also a Humboldt current in the Pacific off of South America, and it’s also named after Alexander von Humboldt.

Geoffroy’s marmoset, which is also known as the white-faced, white-fronted, or tufted-ear marmoset, lives in Brazil and is pretty abundant. It’s a gummivore, which is a type of exudativore! I talked about exudativores when I drew a different (painfully similar in composition) marmoset; they’re creatures that eat tree saps, resins, and gums. Gummivores, as you can perhaps guess, eat the gums specifically.

Callithrix, this marmoset’s genus name, means beautiful hair, and the logic behind that is clear.