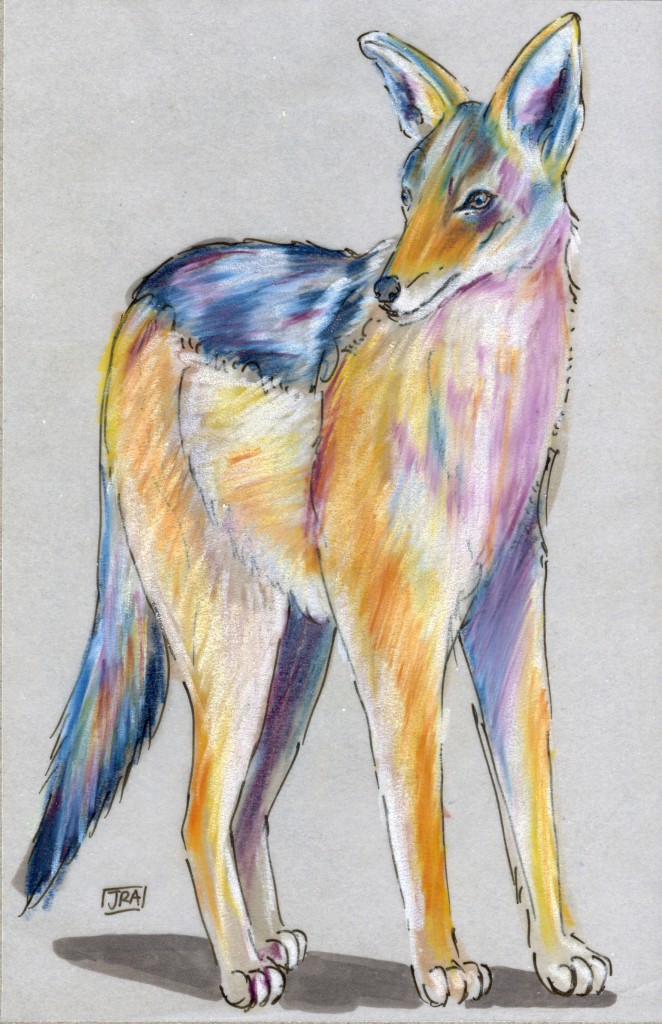 Hello, mammals, and thanks for your patience through the long hiatus I seem to have taken from drawing and posting! We’re back in the swing of things now with this black-backed jackal, who lives in two separate parts of Africa, one in the east and one in the south. There is some controversy about who’s a jackal and who isn’t, but my copy of Walker’s indicates that there are four jackal species. This is the second featured on the Daily Mammal. (Here’s the golden jackal, which I drew a while back.) We’re halfway through with the jackals!

The black-backed jackal is both a scavenger and a predator. It will eat nearly anything: other mammals, birds, reptiles, insects, plants, whatever. It can band with other jackals to bring down a gazelle or antelope, or it can follow lions around and eat their leftovers. Black-backed jackals have been known to work cooperatively with cheetahs to bring down a tasty dinner. Ivan T. Sanderson, in Living Mammals of the World, says, “Their name has come to be applied to all forms of unpleasant hangers-on—a result of their habit of following the large cats, making a special noise when doing so, and then eating up most of the feast as soon as the cat’s back is turned.” I say it’s the cats’ own fault: if someone’s following you and making a special noise that indicates he wants your food, don’t turn your back!

Black-backed jackals live in groups of up to eight or so, at the core of which is a mated pair. A pair may stay together for several years. Adolescent jackals stick around to help their parents raise new babies. In some desert parts of their habitat, black-backed jackals can apparently go up to nine months without drinking water.