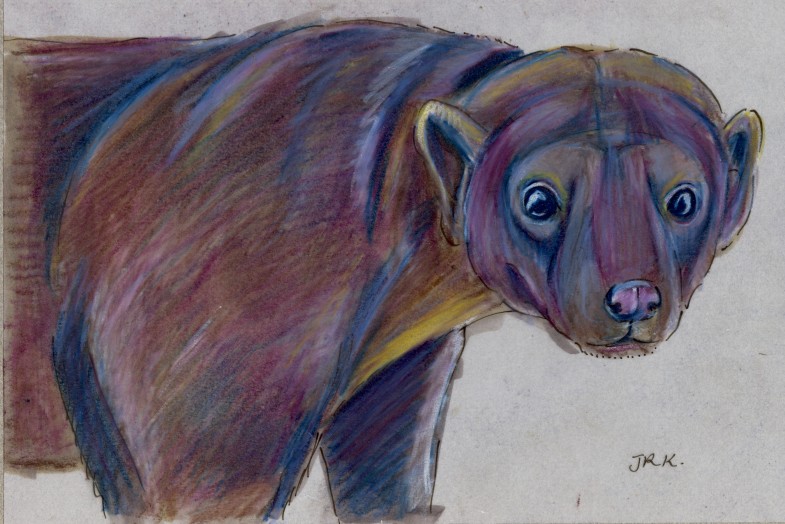 We’re now in the last group of competitors in the World Cup. Just four more countries, including this one, and we’re all done with our look at the soccer tournament. Today’s mammal is the tayra, representing Honduras. It’s a mustelid, or a member of the weasel family, that is quite common in Central and South America. Tayras are not picky eaters. They mostly eat small mammals, like rats, but they also like honeycombs, birds, reptiles, and lots and lots of fruit. They are sometimes kept as pets, and when I googled “tayra pet,” I found this rather interesting historic artifact (the link is to a PDF): a short essay from 1882, reprinted in the New York Times from the London Field, about a pet tayra and animals’ trust of us. The author concludes with a rather utopian vision that contradicts what he said earlier about the viciousness of tayras, but it’s an interesting snapshot of 1882 nevertheless.

I neglected to give the results for Group G yesterday, so here we go! Group G included the tree pangolin from the Ivory Coast, the common genet from Portugal, the silky anteater from Brazil, and the Korean hare from North Korea. The genet is the only carnivore in this group, and I don’t think it would have any trouble with the anteater or the hare. The pangolin’s armor might mean the match between the genet and the pangolin would end in a draw. Hares are pretty harmless, and as my husband Ted says, it’s surprising that the anteater can even beat the ants. So the pangolin’s superior defense takes it through to the next round. From Group G, continuing on to the Round of 16: