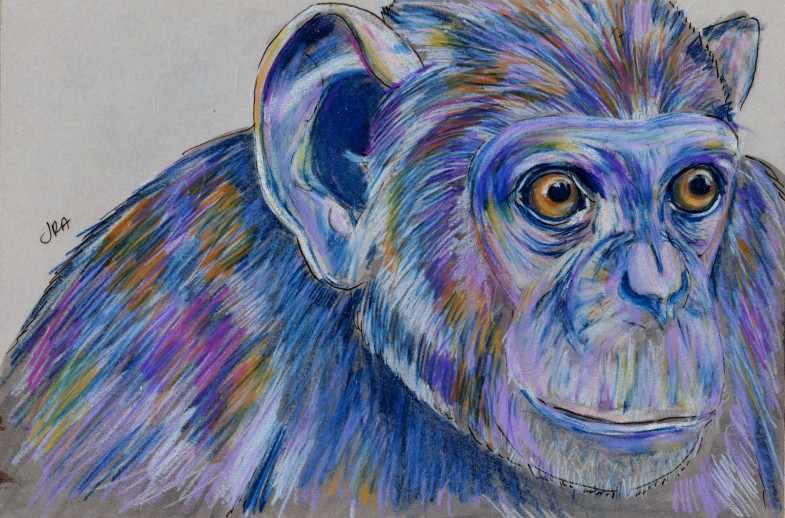 Daily Mammal Now is an occasional feature that offers a drawing and discussion of a mammal currently in the news.

In June of this year, a committee of the Spanish parliament voted to grant limited “human” rights to the other great apes (chimpanzees, bonobos, orangutans, and gorillas). The law, which is expected to go on the books some time in the next several months, will prohibit laboratory testing on great apes, as well as holding them in captivity for entertainment purposes. Zoos can keep their apes, but circuses and the like cannot.

I have mixed feelings about this idea. I support a ban on using great apes as laboratory-test subjects, and I support banning cruelty toward animals in all forms. If I were in charge, factory farms would not exist, animal shelters would not euthanize animals just because they’d been there too long, high school students wouldn’t dissect frogs or rats or cats, and almost all animal testing—maybe even all of it—would be illegal.

What’s with my ambivalence toward the Great Ape Project, then? I support pretty much all of its aims. Where they lose me is with their talk about a community of equals and the right to due process. There’s something condescending about it. If we are declaring ourselves the species that has the ability to grant rights, how can we be equal? Since chimps can’t defend themselves in a court, a human advocate would need to be appointed. Who appoints that person? How do we know that what that person says is truly what the ape wants?

If all apes are to be granted freedom from imprisonment, where are we going to put the thousands of zoo, circus, and laboratory animals that we’d have to set free? Couldn’t it be crueler to send them out into the wild when all they’ve ever known is captivity? I think it’s shameful to keep apes in cold metal cages, and I’d love to see them in nice sanctuaries where they have social groups and plenty of space, but that’s still captivity, or imprisonment if you want to use the Great Ape Project terminology.

I guess I just don’t think we are equals. Our species, the great ape called Homo sapiens, has evolved so many capabilities so far beyond even those of our nearest cousins, the chimpanzees. I think that makes us responsible for them, and for all animals, and by accepting that responsibility, we help them far more than we would by calling them our equals and taking away our power to make choices about their treatment. Our dominion over the beasts doesn’t give us the right to abuse, use, or hurt them. It’s the opposite: it gives us the duty to treat them kindly. We don’t need to grant them personhood to fulfill that duty.

The New York Times came out in favor of Spain’s act: “When Human Rights Extend to Nonhumans.”

The Wall Street Journal was against it: “Monkey Business.”

The Chimpanzee Health Improvement, Maintenance, and Protection Act provides for peaceful retirement (as opposed to euthanasia) for “surplus” laboratory chimpanzees.

The Great Ape Project advocates for “equality beyond humanity.”

42 Ways to Help Animals in Laboratories: download a nice PDF from the Human Society of the United States on this page.

The American Anti-Vivisection Society was founded in 1883 and works to stop experimentation on animals.