Posted on Jan 6, 2008 by JR Kinyak in Mammalthons, Marsupials | 0 comments 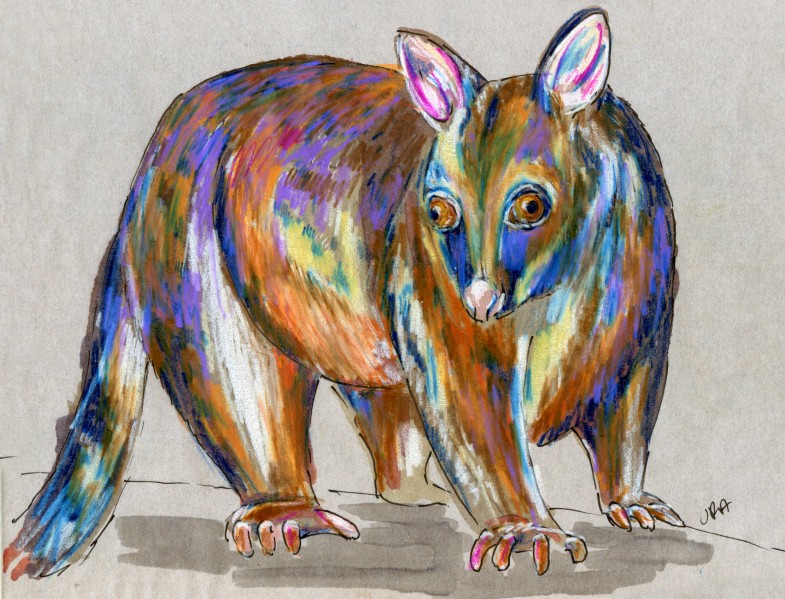 Sure, he’s cute, but don’t get too attached. The New Zealand brush-tailed possum (requested by Lauri) is a tragic figure indeed, and it’s best if we can desensitize ourselves a bit.

Introduced to New Zealand in the 19th century in order to start a fur trade that didn’t survive into the 20th century, the possums now form an overwhelmingly rampant crew of ecodestroyers. See, and I didn’t know this, there are actually only two native mammal species in New Zealand, and they’re both little bats. This means that New Zealand’s plants and other types of animals evolved in utopian isolation. The plants, for instance, are all inviting and delicious, whereas in, say, Australia, they’ve evolved helpful don’t-eat-me adaptations, like spines, thorns, and bitter flavors. Also, mammals introduced to New Zealand have very little competition for resources and no larger-mammal predators, so not only is there lots of food, there’s no one else trying to stop you from eating it. Sometimes, possums breed two times a year in this seeming possum heaven.

Now, its evolutionary isolation also means New Zealand is home to a lot of unique plants and birds. And the estimated 70 million possums that ravage the country nightly (somewhat like the vampires in I Am Legend, I imagine), just by being their hungry possum selves, are an extreme threat to the survival of these very vulnerable species. The situation is so dire that even New Zealand’s largest conservation organization endorses the use of 1080, a biodegradable poison that’s dropped from the air (to be eaten not only by possums but also, it is feared, the occasional special bird).

New Zealanders have also created a burgeoning dead-possum-products industry, with slogans such as “Possums: Not Just Roadkill Anymore” and “Undressing the Possum to Redress Our Forests.” Apparently, possum fur, when mixed with merino, makes a lovely wool for knitting. You can buy possum-fur scarves, teddy bears and unmentionables and possum-leather lampshades and planters. And you can help yourself to a big serving of possum pie. Just doing your part to secure New Zealand’s biodiversity.

Luckily, the Australian population of brush-tailed possum must deal with dingos and brushfires and prickly foliage, and by all accounts is a lively and agreeable segment of the local fauna.