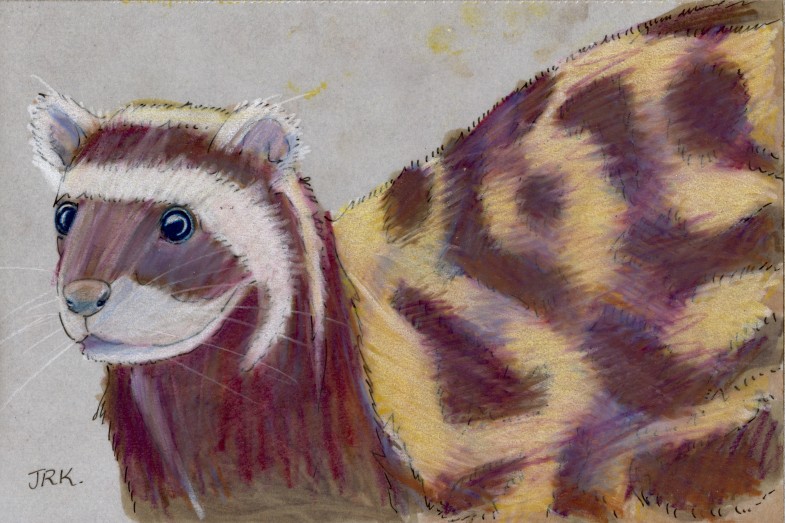 Today marked the end of the first stage of play in the World Cup, and the Round of 16 is set. Unfortunately, today’s country, Serbia, did not make it through, but no matter. The marbled polecat (our second mustelid in a row, by the way) still has a chance in the World Cup of Mammals!

Marbled polecats (who make me hungry with the way their fur evokes marble cake) live in Europe and Asia, but their numbers are decreasing, and the IUCN Red List classifies them as vulnerable, the last step before endangered. That is due to habitat loss, completely unsurprisingly. Polecats like steppes, brushland, and sometimes forests, and between climate change and humans being humanny, those kinds of habitats are going away.

Perhaps we should think twice before crossing them, though. The species account in Mammalian Species number 779, December 20, 2005, has the following chilling details to report:

“[Marbled polecats] have a repertoire of alternative methods to kill prey. They have 2 kinds of killing bites: the 1st is the penetration of the prey’s body by the canines, and the 2nd is crushing the prey without canine penetration (Ben-David et al. 1991). To kill small vertebrate prey, marbled polecats crush the thorax. If the prey struggles, they may pin the prey down with the forepaws and deliver head shakes or follow-up by a bite to the head or neck (Ben-David et al. 1991). On larger, more nondefensive prey (guinea pigs, Cavia porcellus), the polecat bites the nape of the neck and eventually severs the spinal column from the base of the skull. To kill large defensive prey such as rats, the marbled polecat bites the throat. Fleeing prey were bitten dorsally, but defending prey were bitten on the head or neck. Additional details on the killing methods of the marbled polecat are available (Ben-David et al. 1991).”

So let’s be careful around them, shall we? And so should the other mammals of Group D!