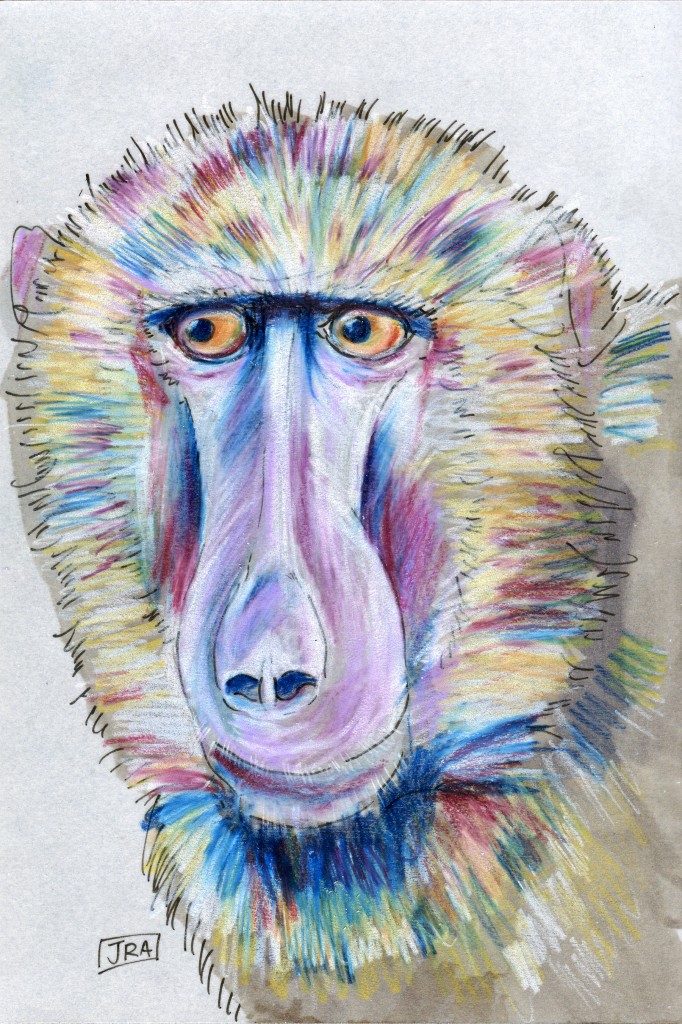 The olive baboon lives in a wide swath of land across the middle of Africa. It’s one of those rare mammals that not only is safe from extinction, but whose numbers seem to be growing. Let’s all celebrate that ’cause it gets depressing around here, doesn’t it?

Papio in the baboon’s scientific name comes from a French word for baboon (according to A.F. Gotch, whom you may or may not believe). Anubis, of course, is the Egyptian god of the afterlife who has the head of a jackal. I’m guessing that anubis in this monkey’s name is a reference to the way baboons’ snouts resembles those of dogs.

On the other hand, whoever named Papio anubis may have been thinking of the lofty status baboons held in ancient Egypt. They were kept as pets (and possibly fruit pickers or other kinds of workers), depicted in art, and mummified in tombs. Supposedly, the Egyptians used their feces as an ingredient in aphrodisiacs. The Egyptian religion associated baboons with the sun god, perhaps because of the raucous ruckus they make at dawn, as well as with the afterlife. Baboons also represented the god Thoth, who was in charge of writing, wisdom, and judging the dead, as well as Hapy, the god of the Nile. The Egyptian god Babi has the head of a baboon. He’s vicious and bloodthirsty and lives on entrails and souls. Our word baboon may come from his name. Interestingly, it’s not known whether baboons were native to Egypt at that time or they were imported from Nubia.

Although it appears ancient Egyptian baboons were respected in theory, analysis of mummified baboon remains indicates that the monkeys were malnourished and kept in too-small cages.

Here is an ancient Egyptian baboon statue at the British Museum, along with some information about baboons and Egypt, and here’s another at the Metropolitan Museum.