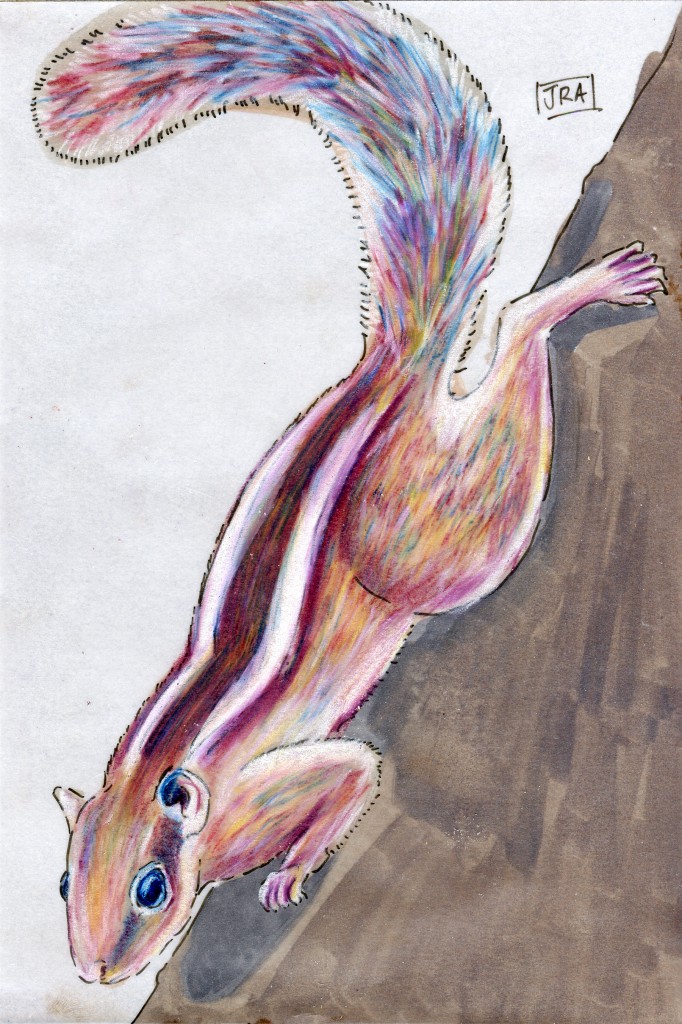 The Indian palm squirrel is a funambulist of the palms! Thinking of the words somnambulist or ambulatory, you can almost come close to figuring out what that means: a fun walker! Sort of. A funambulist is a tightrope walker (funis is Latin for rope; the word fun, on the other hand, comes from the Middle English fon, meaning fool, and this squirrel is no fool).

Indian palm squirrels are endemic to India and Sri Lanka. In a Hindu legend, the god Ram was searching for his beloved wife Sita, who had been kidnapped by a demon. At one point in the epic that tells his story, he must build a bridge across a sea, and he is aided by an army of monkeys and bears. But monkeys and bears aren’t the only animals that help him. This is from a version of the story on the India Times website:

The entire army of monkeys promptly got to work, under the supervision of Hanuman and Jamvant. Ram sat under a tree thinking of Sita and the days ahead.

After a while, he noticed something that moved him to tears. A little squirrel, who had been watching the monkeys carry huge boulders and rocks to build the bridge, began to do her bit to help the Lord. She began carrying little pebbles in her mouth and her tiny hands from a little mound near the tree to the site of construction.

A much amused and pleased Ram picked up the squirrel and petted her, running his fingers from her head down to her tail. The squirrel was blessed and forever marked with stripes—the mark of Lord Ram and a trophy of love.

A while back, a commenter suggested that the Daily Mammal could function as a sort of horoscope, where your personality can be compared to characteristics of the mammal I draw on your birthday. So if you, like me, were born on May 4, you resemble an Indian palm squirrel: you’re agile, fearless, hardworking, and willing to wreak minor destruction to get what you want.