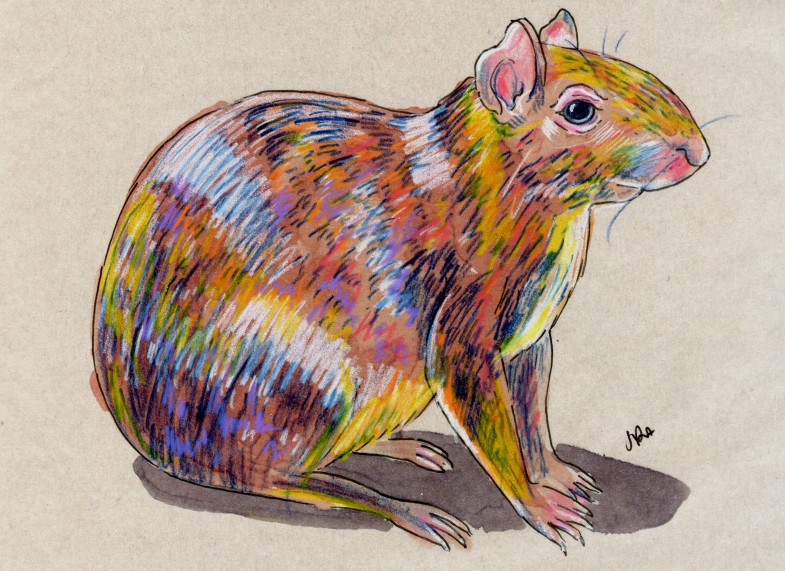 Here we go, stepping unwittingly into another mammalian taxonomic morass. This guy you see here is an agouchi, that much is certain. His exact variety, as well as its scientific name, is a little less clear, at least to me. My Handbook to the Orders and Families of Living Mammals says there are two agouchi species. A cursory search reveals that these are red agouchis and green agouchis. (So that’s what “Red or green?” means!) Sure enough, some are reddish, some sort of greenish.

This one is reddish, and I’m going with the most basic Latin name. Surely sometime in the next 14 years this will all be ironed out, and then I can draw the green one or not, as warranted.

Agouchis live in South America, notably Brazil, and they are rodents. They’re closely related to agoutis, which, you may recall, incurred the wrath of Ivan T. Sanderson. You will be relieved to know that Mr. Sanderson (who, incidentally, looks like Walt Disney) is much sweeter on agouchis, comparing them favorably to their agouti cousins:

“Although even more slender and delicate and supersensitive, it is altogether less hysterical and can be tamed, whereupon it shows remarkable intelligence and even apparent affection for those it trusts.”