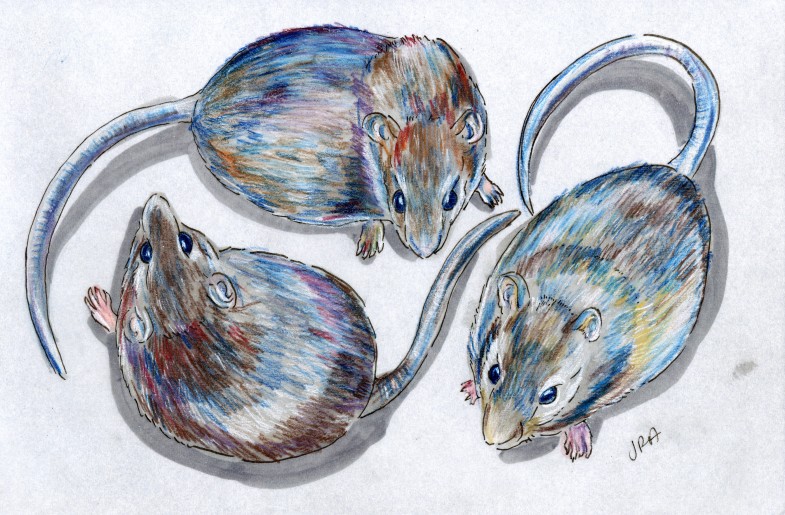 It’s always nice to knock off multiple rodents in one drawing. You have no idea how much the rodents gnaw at me. Forty percent of all mammals are rodents. Forty percent. As I’ve mentioned before, I did not consider that fact when I first thought, “I know! I’ll draw all the mammal species!” In order not to spend the last few years of this project drawing nothing but rodents, I should probably draw them three days a week. Would that bore you?

This particular drawing is one of those good exercises in perfectionism prevention for me. Sometimes I’m not at all happy with my work. But then I remember that there are 5,000 species, so I’m bound to dislike at least 500 of my drawings. Weird!

Swamp Rat (Rattus lutreolus), who lives in Australia. This rat is notable, according to its species account in Mammalian Species, because “under experimental conditions, R. lutreolus was able to tolerate long periods of water deprivation. Intake of solid food and urine output declined during this period…The ecological significance of its extraordinary tolerance for water imbalance requires study.” Also, it has the shortest tail of all the rats in Australia. And other than the Tasmanian subspecies, it likes to live in wetlands.

Bush Rat (Rattus fuscipes), another Australian. Did you know there are Australian Alps? I didn’t, until I read that “although mainly a lowland species, R. fuscipes occurs in Australian Alps to 2,210 m.” in Mammalian Species. I could go on to tell you about what Mammalian Species describes as “a serendipitous discovery relating to dietary intake of fluoroacetate by R. fuscipes of Western Australia,” but I won’t. This particular species account is rather long, but in browsing through it, I see that “During major fires, R. fuscipes retreats into burrows; afterward it hides in deep accumulations of ash.”

Marsh Rice Rat (Oryzomys palustris), of the eastern United States, from southeastern Pennsylvania to the Florida Keys and as far west as Illinois. This rat is semi-aquatic, and like the swamp rat, it lives in wetlands. In several states, marsh rice rats are the main sustenance of barn owls, and they’re also preyed on by other owls, cottonmouths, water snakes, hawks, raccoons, foxes, mink, weasels, and skunks.