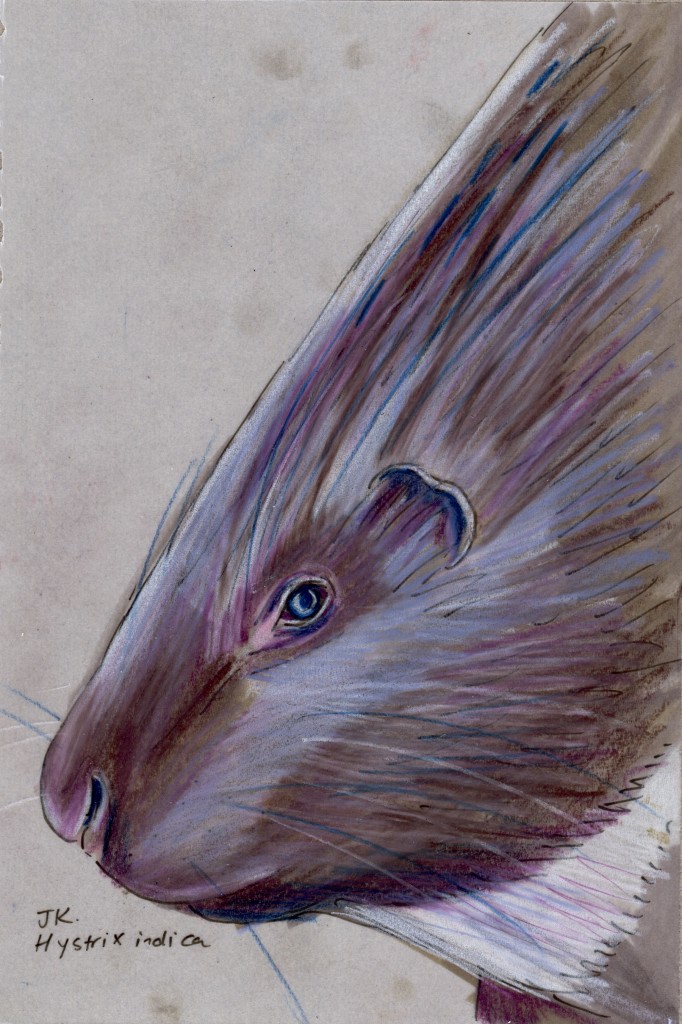 Before our brief Olympic interlude, I was enjoying letting random.org pick the mammals, so let’s get back to that with another random week. Today, the Indian crested porcupine’s number is up. It’s a nocturnal rodent that lives in the region of Asia and the Middle East bordered on one end by Turkey and Syria and on the other by Kyrgyzstan and India.

Porcupine quills are pretty much hardened hair, and they are attached to muscles that give the porcupine impressive control over the quills. Crested porcupines, like this one, have hollow quills on their tails that they can rattle to ward off predators. Even so, they still get into tangles, and surprisingly, porcupines have been indirectly responsible for the deaths of thousands of humans through their quills. It seems that most of the man-eating tigers and leopards of legend became man-eaters after being injured, such as by having porcupine quills embedded in their bodies. When I first read that, I thought that maybe the pain made them grumpy enough to kill anyone who crossed them, but it turns out that it slows them down enough that they can’t hunt their normal prey and have to start killing slow-moving humans.

Two of the most famous hunters of man-eating cats in India, Jim Corbett and Kenneth Anderson, wrote about the phenomenon of finding porcupine quills in the man-eaters’ dead bodies. Here’s Jim Corbett, in his 1944 book Man-eaters of Kumaon, writing about the man-eater of Mohan, a tiger that he killed in 1930:

“When the skin had been removed from the rest of the animal, I made a long cut from the chest to the pad of the festering left leg, and as I removed the skin, drew out of the flesh, one after another, porcupine quills which the men standing round eagerly seized as souvenirs; the longest of these quills was about five inches, and their total number was between twenty-five and thirty. The flesh under the skin, from the tiger’s chest to the pad of his foot, was soapy, and of a dark yellow colour; cause enough to have made the poor beast moan when he walked, and quite sufficient reason for his having become—and having remained—a man-eater, for porcupine quills do not dissolve no matter how long they are embedded in flesh.

“I have extracted, possibly, a couple of hundred porcupine quills from the man-eating tigers I have shot. Many of these quills have been over nine inches in length and as thick as pencils. The majority were embedded in hard muscles, a few were wedged firmly between bones, and all were broken off short under the skin.”

A few pages earlier in the book, and unrelated to porcupines, Corbett agonizes about having killed this tiger while it slept:

“My personal feelings in the matter are I know of little interest to others, but it occurs to me that possibly you also might think it was not cricket, and in that case I should like to put the arguments before you that I used on myself, in the hope that you will find them more satisfactory than I did. These arguments were (a) the tiger was a man-eater that was better dead than alive, (b) therefore it made no difference whether he was awake or asleep when killed, and (c) that had I walked away when I saw his belly heaving up and down I should have been morally responsible for the deaths of all the human beings he killed thereafter. All good and sound arguments, you will admit, for my having acted as I did; but the regret remains that through fear of the consequences to myself, or fear of losing the only chance I might ever get, or possibly a combination of the two, I did not awaken the sleeping animal and give him a sporting chance.”

Now you can “walk in Jim Corbett’s footsteps” on a guided trek along “the Maneater of Mohan Trail,” hosted by Wild World India; that’s a trip I wouldn’t mind taking.

In case you are as drawn to these characters as I am, here’s Kenneth Anderson, in his 1955 book Nine Man-eaters and One Rogue, telling the story of how he came to kill the Spotted Devil of Gummalapur, a man-eating leopard that was found, after its death, to have porcupine quills embedded in its foot.

Natural History magazine published an article in 2006 that’s pretty interesting on the subject of the force it takes to remove porcupine needles once they’re embedded, as well as on the chemistry of the odor that porcupines emit to warn potential enemies to stay away. And finally, here’s a short night-vision video of an Indian crested porcupine minding its own business.