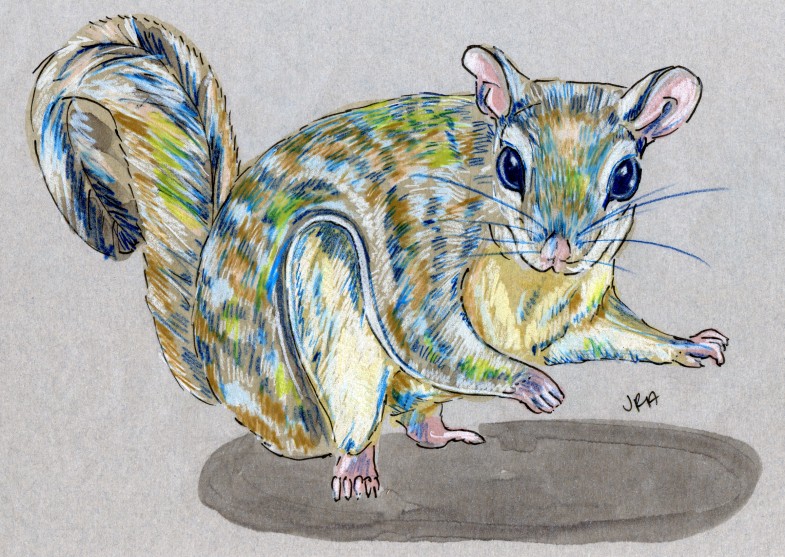 Today inaugurates a special theme week at The Daily Mammal: the mammals of North Carolina. I was in Raleigh on a business trip this past week, and I had the opportunity to meet not only many mammals of the human persuasion, but one non-human, a male flying squirrel, like this one here. I’d never seen one before, and I have to tell you, they’re my new favorite mammal. This flying squirrel is for Jesse. Stay tuned for the rest of this week to meet more North Carolinian mammals.

The southern flying squirrel lives in forests throughout the eastern United States, up a bit into Canada and down into Central America. Their Latin name means flying gray mouse, and they are small—around mouse-size—with grayish-brown fur up top and creamy yellowish on their undersides (that is, ventral). They glide “in a descending curve” from treetop to treetop; Mammalian Species says that the record longest glide was 90 meters, which is nearly 300 feet! Usually, their glides are no more than about 9 meters long.

At the NC Museum of Natural Sciences, where they introduced me to the flying squirrel, I also got to see the shells of nuts that flying squirrels had eaten. They have a unique way of getting at the meat of the nuts. They create a round hole in the shell and then scrape the meat out with their teeth. Also, I saw a bit of Life After People on the History Channel, and while I wasn’t paying complete attention, it seemed to suggest that if humans disappeared, domestic cats would eventually develop adaptations similar to those of flying squirrels, which would allow them to glide among skyscrapers!