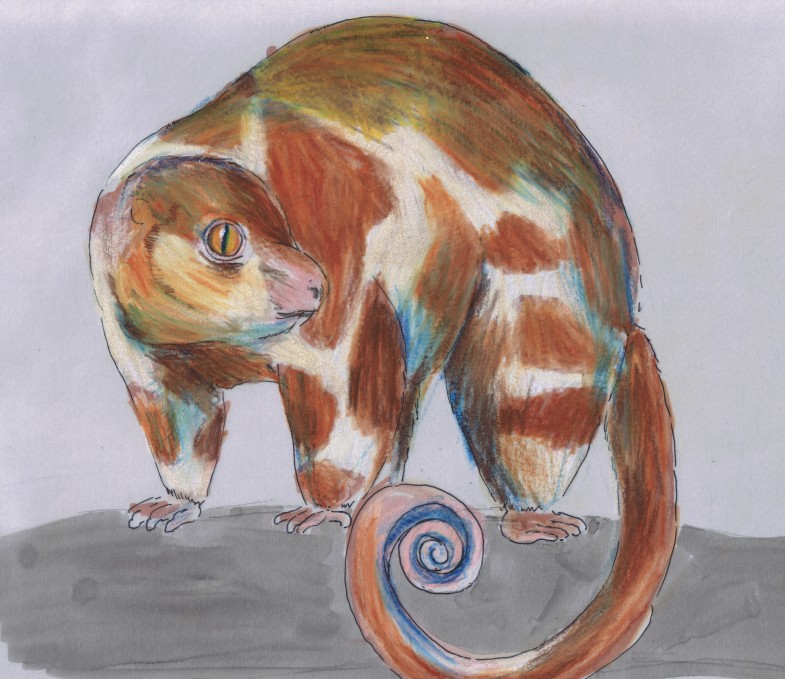 When I was a girl, I had a subscription to these wildlife cards. Once a month or so—maybe more often—I’d get a small pack of informational cards about animals. There was one species per card. On the front was a photograph of the animal, with its name and some symbols that indicated its class and family, its habitat, and such. On the back was a dense profile of the animal and more specialized information, like gestation period and lifespan. The cards belonged in a special file box, and you organized them taxonomically.

One day, a card came that had a picture of an animal called a cuscus. (It was this picture, actually.) I had never heard of it before, and in fact have only very rarely heard of it since, but I fell in love with it. It was pretty much the cutest thing I’d ever seen, and so mysterious and weird, with its big eyes, orange spots, and cinnamon-roll tail. I kept the cuscus card on my bulletin board for years, and when I finally threw away my wildlife cards (how I wish I hadn’t now!), it was the only one I kept. I can picture the front of that card perfectly even now, from the light green bar at the top to the black silhouette of Australia to the typeface the word Cuscus was printed in.

Incidentally, they are nocturnal marsupials, and the spotted cuscus is only one of several species. They’re also called phalangers. In this species, the male has the rust-colored spots and the female is a solid creamy color.

Even more incidentally, since now that I think about it, the above paragraph wasn’t really incidental at all, I ran out of my beloved paper rolls several days ago. You may have noticed that the nocturnal mammals and the ones from last weekend have a sort of mottled background; that’s from the only similar paper I could get quickly enough to get caught up. Today I bought a roll from Artisan in Santa Fe, but it’s more like vellum than the paper I need—very smooth, slick even, with no tooth so my colored pencil just sits on top of the paper. Nothing looks or feels right, and I’m out of sorts about drawing this week. But I did order what should be the right stuff tonight (actually, Ted ordered it for me), so I hope that next week will be back to normal. And the slick, weird roll from Artisan might be good for a drawing of a dolphin or a seal.