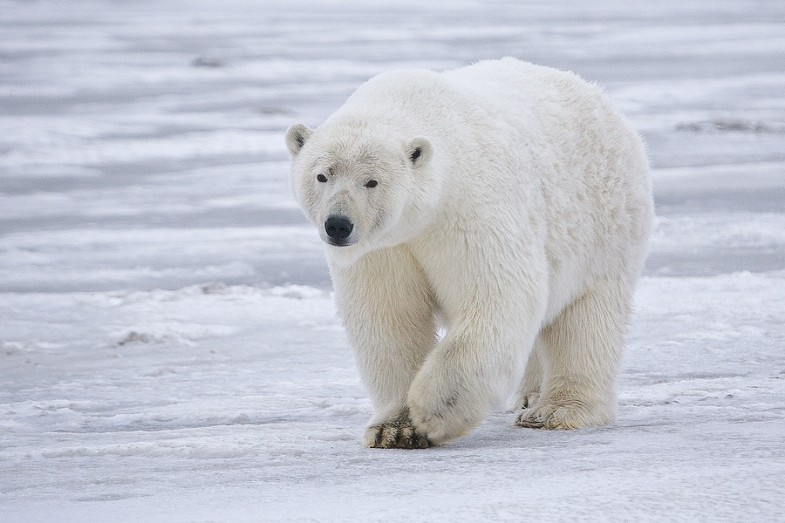 Polar Bear in Alaska by rubyblossom, licensed under Creative Commons

Sometimes I see articles online or in magazines that I think would interest Daily Mammal readers. When they concern mammals I haven’t drawn yet, I can feature them as Daily Mammal Now posts. But when I’ve already drawn them, or just don’t want to or can’t draw them right away for some reason, I don’t have a good vehicle to share them with you.

That’s why I’m going to start occasionally (weekly? fortnightly? semiweekly? who knows?) pointing you to some very recent news stories and articles that you might want to read, or at least know about. Here’s the first Mammal News Roundup.

Daily Mail, May 12, 2008: There’s a cow the size of an elephant. He was left on the doorstop of an English animal sanctuary when he was an infant. The first picture makes him look especially large; check it out. Note to Americans: swede is what Brits call rutabaga.

Science Daily, May 13, 2008: Double mammal newsflash: In Brazil, they’re training dogs to recognize the scent of various endangered mammals (like the jaguar and the giant anteater), helping researchers monitor their populations.

Madison, Wisconsin’s Capital Times, May 13, 2008: They’re still trying to figure out what’s causing white-nose syndrome, the strange ailment that’s devastating some populations of bats in the northeastern United States. (Click on the Daily Mammal Now link above for more.)

U.S. Department of the Interior news release, May 14, 2008: Polar bears are now listed as a threatened species under the Endangered Species Act. Since climate change is a major cause of polar bears’ decline, but it’s very difficult, to say the least, to prove how any particular action by Americans influences the climate change that’s harming the bears, it is unclear how much the move will help the bears.

When I drew the polar bear, I found in my research that some people think that the polar bear is actually the same species as the brown bear. I looked into that a little more today and learned some interesting things. It seems polar bears, which are recognized as a distinct species by most anyone without an ax to grind, evolved from the brown bear pretty recently, some 200,000 years ago. And they were still developing adaptations as recently as 40,000 years ago.

I wonder how you would decide when the species was still the brown bear and when it had become the polar bear. Maybe there’s a bare minimum of changes and differences that must be present? Or a certain number of DNA markers that should be present or absent? Or is it a case of “you know it when you see it”?

Some people, evidently regarded as nuts by some other people, think that melting ice in the Arctic will force the polar bear to evolve back into the brown bear, but it seems pretty likely to me that they’re endangered enough that we can’t expect them to be around long enough for that to happen with no intervention. Being an amateur biologist, though, I can just speculate.

BBC News, December 10, 2007: An Icelandic (yay!) scientist found the most ancient polar bear jawbone we have, a 150,000-year-old specimen. The article discusses, in brief, the evolutionary history of the polar bear.