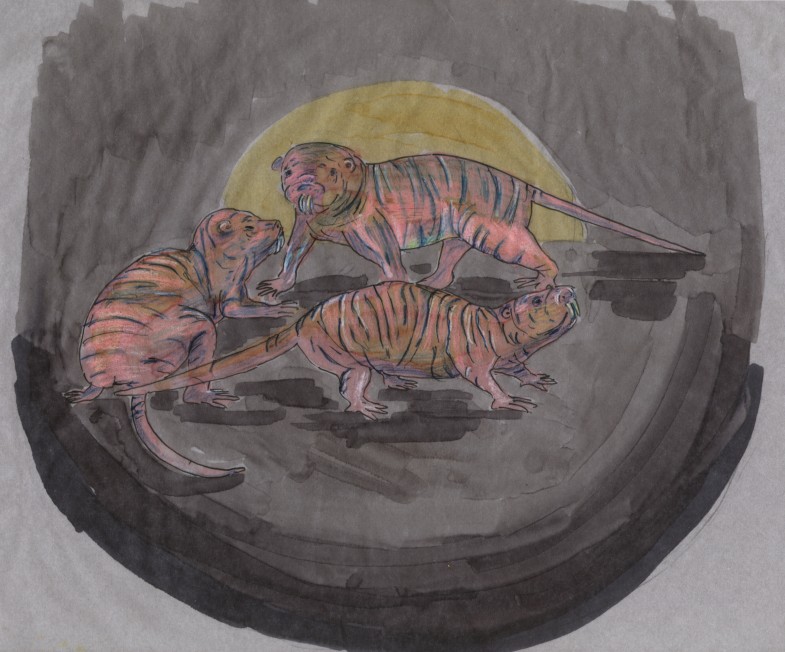 Between the echidna and the naked mole-rat, it’s safe to say that we have now probably covered the two strangest species of mammals in the world, and in the first month of mammals!

The naked mole-rat lives in the desert of Kenya, Ethiopia, and Somalia. What’s downright amazing about these rodents is that they live more like insects than like mammals. A colony of naked mole-rats comprises about 80 or so creatures, including one queen and her harem of one, two, or three males. These males and the queen are the only members of the colony that reproduce. That’s okay with the others, though, because all the mole-rats in a particular colony are extremely closely related, so everyone’s genes get passed down. The mole-rat who becomes queen creates more space between her vertebrae, allowing her to carry litters of babies.

The non-reproducing mole-rats are workers, and they’re divided into castes: they’re either diggers or soldiers protecting the colony. The mole-rats live in a huge network of underground tunnels. They only barely have eyes at all, and often keep them closed while they’re scurrying around. If they have to leave the tunnel—which happens extremely rarely—they’ll only go under cover of night. They have no way to regulate their body temperature, so it fluctuates with their environment. Since they’re underground, it’s relatively cool, but they do sleep during the hot days. They’re about three or four inches long, and almost hairless.

So many more amazing things about these mammals. You really should learn more about them!

The Naked Truth About Mole-Rats