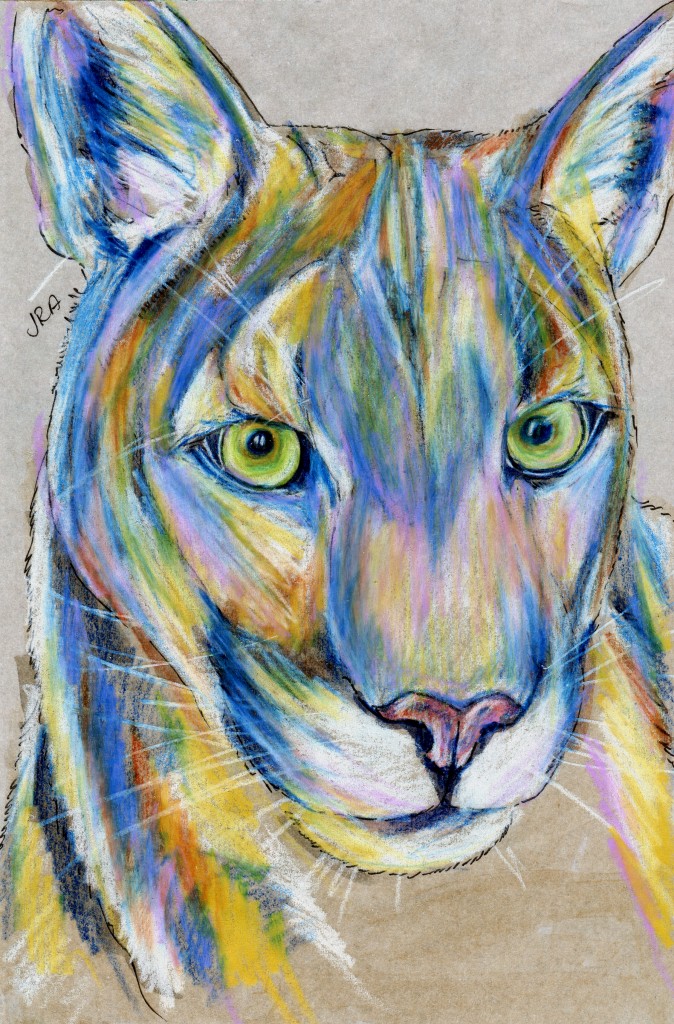 I want to tell you about these amazing old books I recently acquired. A couple of weeks ago, my mom and I went to our local “indoor flea market.” I happened across this old hardbound green book called Wonders of Animal Life, volume four. It’s one of those great old 1920s or 1930s books with the copperplate photo captions and tinted plates for illustrations and lots and lots of black-and-white photos. I fell so in love with volume four that I had to hunt down the rest of the series, and through AbeBooks.com, I found someone selling volumes 1–3. What luck! They arrived today and they’re just as wonderful as volume 4.

The series comprises essays by various scientists and other kinds of experts. There’s no rhyme or reason to their selection or to their arrangement, as far as I can tell. Topics include “Strange Tails and Their Many Uses,” “Gluttons of the Sea,” “Long Necks and Short Necks,” “The Gamut of Sound in the Insect World,” The Wonderful Wanderings of Animals,” “Nature’s Strange Show of Freaks,” “Is Evolution Still Going On?,” and, most pertinent to today’s Daily Mammal post, “The Mystery of the Puma” by Hamilton Fyfe.

Mr. Fyfe is a gentleman not unlike our beloved Ivan T. Sanderson, the Daily Mammal’s patron saint. A war correspondent and political propagandist, a practicer of what he termed vagabondage, a man about town with an opinion on everything, Mr. Fyfe here expounds on the puma, also known as the catamount, the cougar, the panther, the painter, or the mountain lion. After explaining that the puma’s favorite food is horseflesh, he states that “it will not attack or even in some circumstances defend itself from the human race…due to some unexplained influence which the human race seems to have upon it.” Fyfe continues, “This influence is strong enough to make the puma…run from man, and even sit unresisting and trembling while man deals it a death-blow.” According to Fyfe, “the natives of South America” refer to the puma as el amigo del cristiano, the friend of the Christian, and “it has actually been known to volunteer its services as a protector of man.”

A photograph of a puma accompanying the essay is captioned “ONLY WILD ANIMAL THAT IS FRIENDLY TO MAN” and informs that “when confronted by man it usually seems to behave like a large and friendly cat. A wild puma will purr in the presence of man and even rub itself against his legs. But apart from this it has the pleasing habit of playing for hours by itself in the midst of the desert at hide-and-seek or at chasing butterflies.”

Now, I know that pumas avoid man whenever possible. In my life as a citizen of the western United States, I’ve seen bobcats, coyotes, and bears, but never a mountain lion. Whether this is due to some magical influence man has over the species, I don’t know, but Fyfe is correct that they avoid us. That makes it particularly unlikely that they really volunteer their services as bodyguards or that they like to rub up against people’s legs, purring, and it’s hard to imagine them cowering in acceptance when dealt a death blow. Maybe in South America that’s true, but it’s hard to imagine.

While mountain lion attacks on people have always been quite rare, they have increased rather alarmingly in recent decades. A month ago, a large animal that may or may not have been a mountain lion attacked a five-year-old boy in the Sandia Mountains here in Albuquerque. As we humans move closer and closer to the homes of other animals, as we do things that make it harder for them to feel safe and find food and live their lives, we experience more encounters of all kinds with wild animals. It would be nice if they all rubbed up against our legs and purred and protected us and chased butterflies with us. I bet they think it would be nice if we just left them alone.