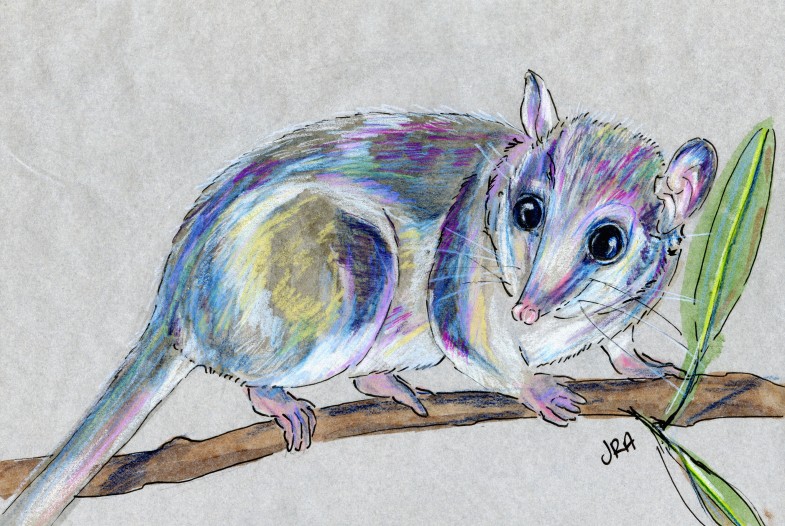 One of my goals as the first year of the Daily Mammal comes to a close was to have drawn every order of mammals by June 3. If my calculations are correct, that’s 10 orders (out of 28 or so, depending on who’s counting; we’ve been leaning heavily on the carnivora, primates, and rodentia orders, I think). This one, Microbiotheria, caught my eye because in that order there’s only one family…one genus…and one species. This guy, the monito del monte (little mountain monkey), is the last of his kind.

Weighing in at about as much as a dollar in quarters, the monito del monte (let’s call him MDM, shall we?) makes his home in part of Chile and a sliver of Argentina. MDMs are marsupials, and in looking for pictures of them, I found notices of a recent scientific discovery. You see, in Australia, they’ve found the 55-million-year-old fossilized remains of a creature called the djarthia, which is Australia’s oldest known marsupial and likely the ancestor of all of the marsupials living in Australia today.

What does that have to do with the MDM? Well, while scientists had long suspected that the MDM was closer kin to the Australian marsupials than to the few living in the Americas, finding these fossils proved it. (This has implications for theories about where and when marsupials evolved and from where and to where they migrated; some scientists believe that marsupials evolved in South America and went to Australia via Antarctica when the three continents were part of Gondwana, and this would indicate that the MDM went back to South America at some point before the continents split up, then got stranded there, basically.)

Anyway, I won’t get into the whole train of investigation that set me on tonight (phylogenetics, cladistics, systematics…). It may be enough to know that the tiny monito del monte is cute, that it’s “secretive,” according to Science Daily, and that, in the colder parts of its range where it hibernates in the winter, it stores up enough fat in the base of its tail to double its weight in a week. Some Chilean Indians call it the colocolo. Finally, here’s a new (to me, and maybe to you) word: scansorial, meaning “adapted to or specialized for climbing.” In a sentence: “Some people think the monito del monte is arboreal, but since it doesn’t really spend all its time in the treetops, it’s probably more accurate to call it scansorial.”

Two weeks straight of mammals! I have a full weekend and a business trip on Monday, so this streak will likely end soon—let’s celebrate it while we can!