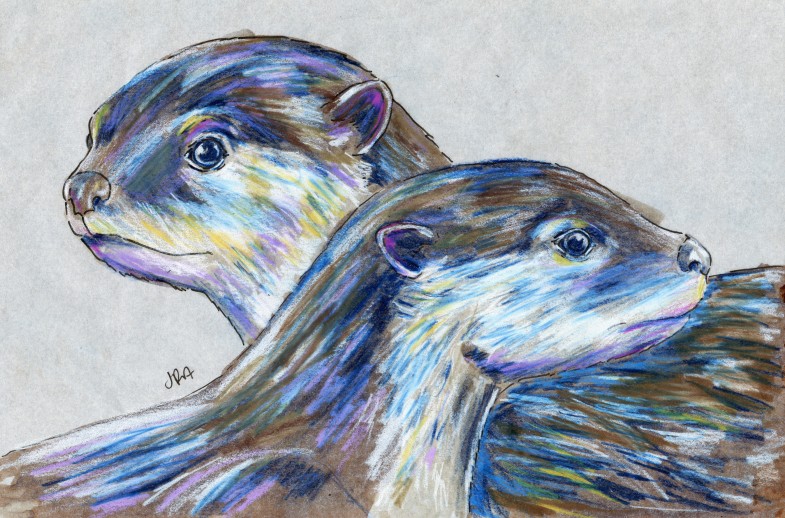 To celebrate my boss Ramona’s successful trip to the Kurdish region of northern Iraq, as well as because we’re still at war there, I’m going to be spotlighting some of the mammals of Iraq this week. These two fine fellows are smooth-coated otters, who live in Iraq’s Mesopotamian marshlands, as well as in other parts of Asia. The otters have a way of forming a semicircle with the rest of their family and sort of herding fish in front of them. In India, people who noticed this have had some success in training smooth-coated otters to herd fish right into their nets!

Smooth-coated otters are classified as vulnerable by the International Union for Conservation of Nature (IUCN). One famous subspecies, known only to live in Iraq, may be extinct now. This variety was called Maxwell’s otter after an author named Gavin Maxwell. Maxwell found an otter in Iraq and took it back home with him, where he raised it in the Scottish highlands. The lovable otter, Mij, became the star of a best-selling novel, Ring of Bright Water, that was adapted into a popular movie in 1969.

Now, I had never heard of this book and movie, which is both a surprise, as I was an animal-book freak as a kid, and a relief, as it has, apparently, a heartbreaking ending. I’m telling you this without a spoiler alert because I’ve been reading horror stories of children and adults alike being traumatized by the sudden tragedy in what was a playful romp of a movie. If you have kids and you want to read a great book about a pet otter with no tears, I recommend the currently out-of-print Picaro by Dorothy Wisbeski, which was one of my and my dad’s favorites when I was little. It has really beautiful illustrations including, if I recall correctly, one of Picaro splashing in the toilet.

When Saddam Hussein’s Baath regime was in power in Iraq, they almost destroyed Iraq’s marshlands in an attempt to eradicate the Marsh Arabs, a society that had lived there for millennia. The regime drained the marshes, burned villages, and destroyed livestock and crops. In addition to displacing and destroying the livelihoods of thousands and thousands of Marsh Arabs, this likely led to the extinction of the Maxwell’s subspecies of smooth-coated otter. USAID runs a program to restore and reflood Iraq’s marshes and help develop the communities around them. Learn more about the Iraq Marshlands Restoration Program here.