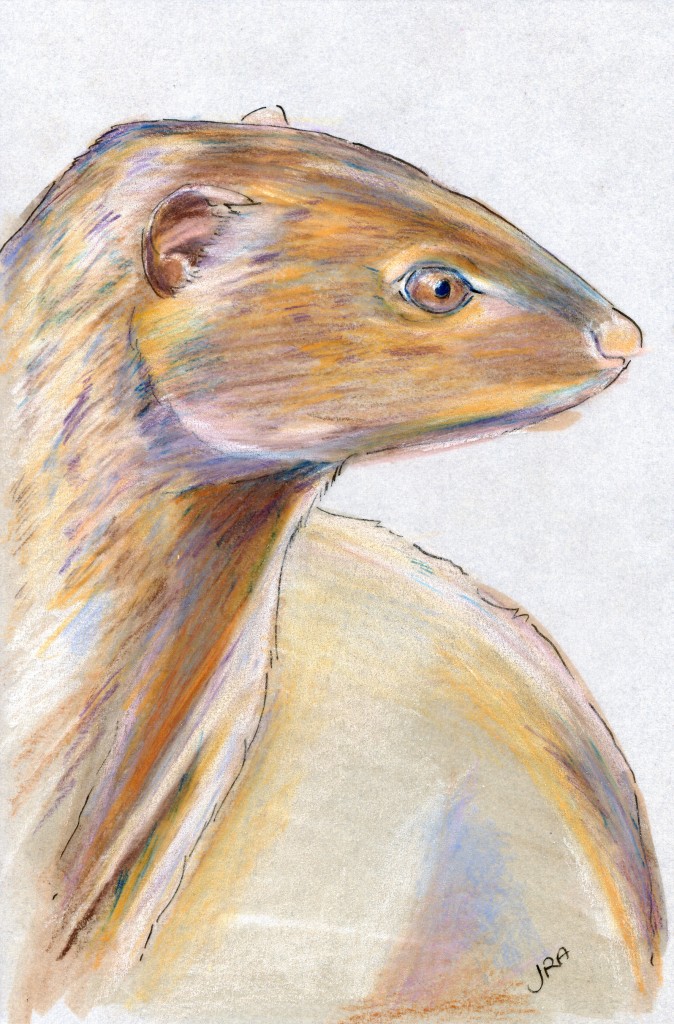 Let’s continue our celebration of President-Elect Obama’s childhood home, shall we? Yesterday I mentioned that today we’d meet the only land mammal native to Hawaii (or as native as a mammal can be to Hawaii, meaning, I suppose, that it was already there when people arrived). Well, this mongoose isn’t it. Hawaii’s only indigenous land mammal is the Hawaiian hoary bat, a subspecies—endemic to Hawaii—of the regular hoary bat, Lasiurus cinereus. The hoary bat is the most widespread bat in North America, but the Hawaiian variety is endangered. Imagine those lonesome little bats arriving at their island home. Imagine them flying alone through the night, the only bats in Hawaii, their calls echoing back to them unmixed with those of other species. Anyway, I drew it in 2007, so have a look if you want, and now we’ll move on to the invasive and introduced species on the islands of Hawaii.

Here’s the deal with islands. They’re hard to get to and hard to get off of. The species that make it to islands are usually those that can swim or fly. They often don’t evolve any adaptations to predators because they don’t have any; they just cruise around their island paradises quite content. Then people show up in boats, and on those boats are stow-away rats—they can’t swim or fly but they’re good at hitching rides. Rats start causing general havoc, to both the agricultural operations the people set up and the native ecosystems. Then everybody freaks out and needs to get rid of the rats.

In 1872, Bancroft Espeut, a sugar-cane plantation owner in Jamaica, had what seemed like a good idea at the time. Mongooses will eat just about anything, he reckoned, so why not let them get a taste of Jamaican rats? Espeut imported nine mongooses from India and set them loose on his land. They were a hit and quickly multiplied, spreading throughout Jamaica. What happened next? This is from Nature’s October 21, 1897, issue:

“Ten years later it was estimated that the saving to the colony through the work of this animal amounted to £100,000 annually. Then came a sudden change in the aspect of affairs. It was found that the mongoose destroyed all ground-nesting birds, and that the poultry as well as the insectivorous reptiles and batrachians of the island were being exterminated by it. Injurious insects increased in consequence a thousand-fold; the temporary benefits of the introduction were speedily wiped away, and the mongoose became a pest. Domestic animals, including young pigs, kids, lambs, newly-dropped calves, puppies, and kittens, were destroyed by it, while it also ate ripe bananas, pine-apples, young corn, avocado pears, sweet potatoes, cocoas, yams, peas, sugar-cane, meat and salt provisions, and fish. Now, we are told, nature has made another effort to restore the balance. With the increase of insects, due to the destruction by the mongoose of their destroyers, has come an increase of ticks, which are destroying the mongoose, and all Jamaicans rejoice.”

Well. If only Hawaii had waited until 1897 to start thinking about importing its own group of mongooses! But no. In 1883, Hawaii brought 72 of them over from Jamaica; descendents of this group eventually made their way to all of the Hawaiian islands but Kauai. (Not Kauai? Well, kind of.)

The rat population was unaffected, perhaps because mongooses are diurnal and rats are nocturnal, and so, like two ships passing at dusk (or dawn), they don’t really come into much contact. But lots and lots of other creatures fell prey to the mongooses’ appetites, and the little beasts have been responsible for a number of extinctions, almost including that of the Hawaiian nene, a goose who will be familiar to all crossword-puzzle lovers. (The nene itself is actually Canadian, but that’s another story, and not a mammalian one.)

So here’s a drawing of one of Hawaii’s mongooses (all of whom are descended from the 9 that Bancroft Espeut brought from India to Jamaica). Through no fault of their own, they are a major scourge of the islands, and all the while, they’re just trying to do what mongooses do. No one’s come up with a really great idea for getting rid of them—poison seems the most promising, and they may as well skip the prairie dog vacuum—but at least they stand as a lesson about the dangers of tampering with the balance of ecosystems.