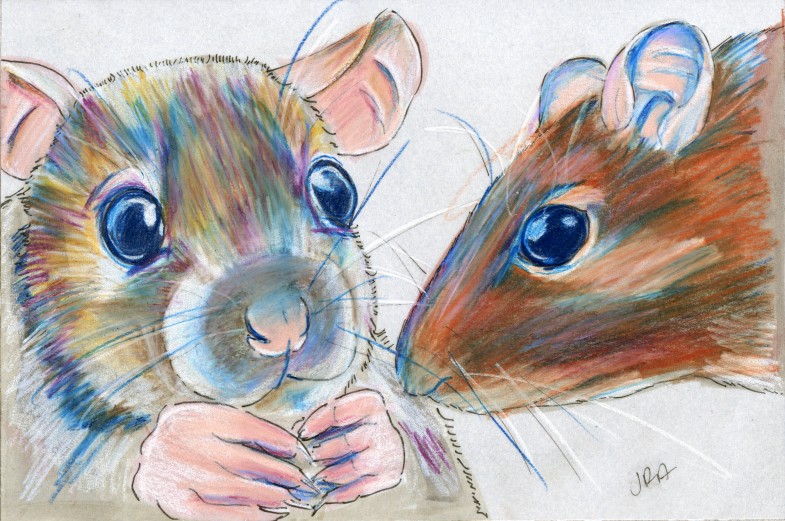 As I write this, there are only about 11 hours left until Barack Obama assumes the presidency, which means we’ll be celebrating his home state for only a little while longer here at the Daily Mammal. The other day, we looked at the small Asian mongoose, which was imported to kill Hawaiian rats. Now, let’s meet a couple of the rats in question.

On the left is the Norway or brown rat, Rattus norvegicus. This rat came to Hawaii on European ships in the 19th century. The fellow on the right is a Polynesian or Pacific rat, otherwise known as Rattus exulans. It came centuries earlier in Polynesian canoes. These two species, as well as the black or roof rat, are responsible for the extinction of a number of Hawaiian bird species and the decline of even more, both because they prey on the birds and their nests, and because they compete with birds for food. They also carry a range of diseases and parasites. And they love to destroy sugarcane, pineapple, coffee, macadamia, and banana crops. They don’t think of it as destruction, though; to them, it’s just lunch.

The mongooses didn’t eradicate the rats of Hawaii, as it was hoped they would. Now, poison is the best way to get rid of them, and you can use electric fences to keep them out of places you’d rather they not visit.

We haven’t visited with Ivan T. Sanderson, author of Living Mammals of the World, in a while. Here’s what he says about one of today’s rodents:

“Although Man is undeniably ‘top-mammal’ in certain ways, and the Elephant may be regarded as the most highly ‘evolved,’ there is little doubt that some rat, and probably the Brown Rat (Rattus norvegicus) is actually the finest—in every sense of the word and especially in efficiency—product that Nature has managed to create on the planet today…Rats preserve a much more practical balance between compassion for and indifference to their own kind than we do. While weaklings or cripples among their numbers may be left alone, ‘fools’ and ‘criminals’ seem often to be deliberately eliminated or killed outright. All of this results in much sounder eugenics than we practice. That there are more individual Brown Rats in North America than there are people, is not the result of man’s carelessness, indifference, or wasteful and dirty habits; it is the result of the greater stamina and, frankly, commonsense of the rats.”

I don’t know about you, but I’m okay with our unsound eugenics! The Polynesian rat is called kiore in the Maori language, and it reached New Zealand, as it did Hawaii, in Polynesian canoes. In traditional Maori culture, the kiore plays an important part in ceremonies and mythology. You can read about that here in the Te Ara Encyclopedia of New Zealand.