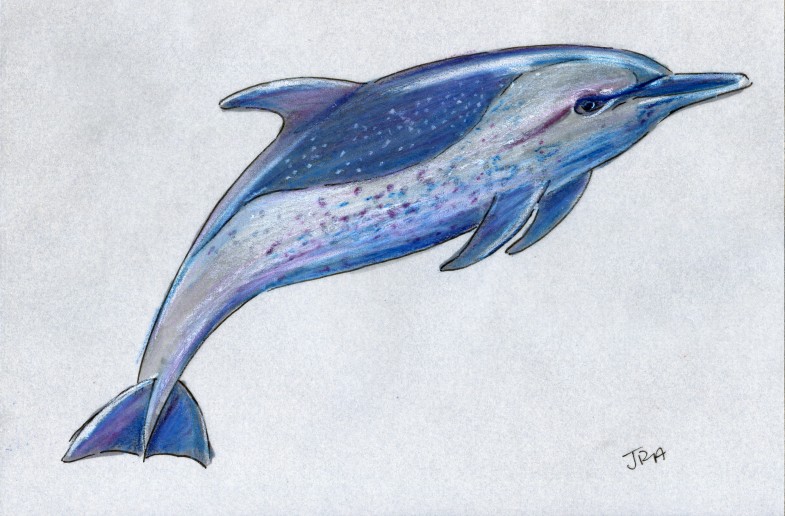 Today we continue our look at the mammals of U.S. President-Elect Obama’s home state, Hawaii.

While Hawaii is rather short on native land mammals, it enjoys an abundance of native marine mammals. One of these is the pantropical spotted dolphin, which is found in all of the oceans in the world between 40ºN and 40ºS. As its name broadcasts, it’s characterized by its light-on-dark and dark-on-light spots, which increase with age.

You probably remember the public discussions and movements about dolphins and tuna fishing from the 1980s and early 1990s. The pantropical spotted dolphin is the species that was most affected by the tuna industry. You see, these dolphins have a close relationship—a loyalty almost—with yellowfin tuna. Before the 1950s, tuna had to be caught one at a time. Then advances in net technology made it possible to catch them in a big net called a purse seine. The best way to do this was to find their dolphin friends, who have to surface to breathe (unlike tuna, which are fish).

The idea was to catch the dolphins and tuna together, then release the dolphins, but catching the tuna was the priority, not saving the dolphins. The number of dolphins “accidentally” killed by tuna fishing since the 1950s is more than three times the number of whales killed—on purpose—by the commercial whaling industry in all of the 20th century.

Dolphins, the quintessential charismatic megafauna, were able to rally the support of the public, and a series of regulations, organizations, boycotts, and laws have brought the number of dolphins killed way, way down. Despite the Bush administration’s efforts to undermine the integrity of the Dolphin-Safe Tuna label, it’s now easy, in the U.S. and many other countries, to buy tuna caught without killing dolphins. (If your tuna doesn’t say dolphin-safe, it probably isn’t, so shop on the safe side.)

Unfortunately, the pantropical spotted dolphin has yet to recover from the years of dolphin-dangerous tuna fishing, and the IUCN calls it conservation-dependent. Here’s hoping Barack Obama will help protect his fellow native Hawaiians.

From NOAA: a good, brief primer on the tuna/dolphin issue.