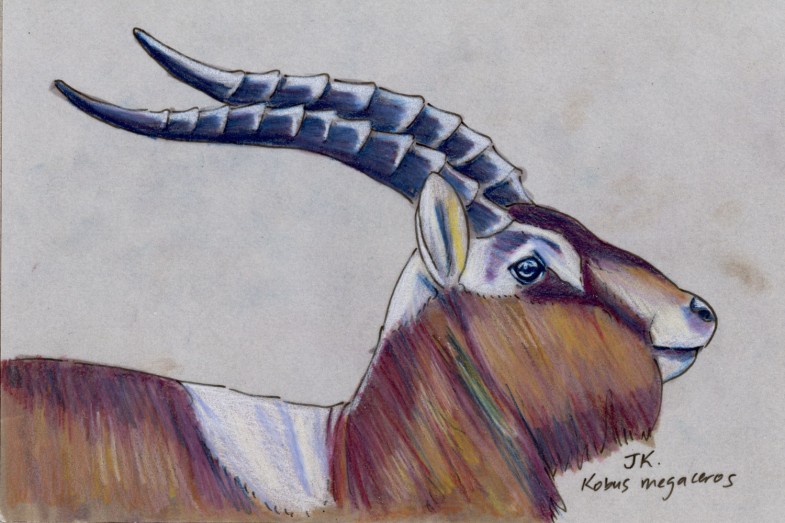 Today’s Mammalympian is a fencer. Well, sort of. In human fencing, the object is to touch your opponent with your blade; your opponent uses his or her blade to keep you from doing that, while also trying to touch you. Some mammals carry their “blades” on their heads in the form of horns or antlers, and they’re more likely to attempt to wrestle their opponents to the ground. Maybe it’s more like arm wrestling. But for both humans and other mammals, the ultimate goal is to assert dominance over a rival.

Lechwes are antelopes, and this species spends a lot of time in shallow water. They have extra-long hooves that help them navigate swampy places, and males will apparently spar with their heads underwater. Mrs. Gray’s lechwe lives in Ethiopia and Sudan, and the IUCN lists it as endangered, mostly because of civil war, the displacement and resettlement of humans, and hunting for meat. 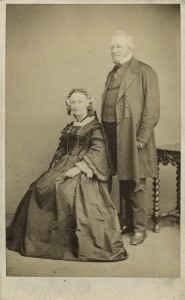 Mrs. Gray’s lechwe is more commonly called the Nile lechwe, but I’m interested in Mrs. Gray. I spent an hour or two yesterday figuring out exactly who she was, only to discover this morning that my new copy of Mammals: Their Latin Names Explained by A.F. Gotch could have told me. Mrs. Gray was Maria Emma Gray, and her husband, John Edward Gray, was a keeper at the British Museum. He named this species Kobus maria, but someone had already named it Kobus megaceros (megaceros means big horn), and with scientific names, the earlier name sticks. To the left is a portrait of Mrs. and Mr. Gray from 1863. She was 13 years older than him and the widow of his second cousin.

I’ve found a bit of a kindred spirit in Mrs. Gray. Over 15 years or so, she produced a five-volume set of her etchings of molluscs, called Figures of Molluscous Animals, Selected from Various Authors, Etched for the Use of Students. In his preface to her work, Mrs. Gray’s husband writes,

“The tracings from which these Etchings of Molluscous Animals have been taken, were originally made by Mrs. GRAY, for my use, with the view of their being added to my collection of figures of Shells, and to aid me in their arrangement. Hoping that others may find such a collection of figures (many of them copied from expensive works, and brought together from sources not easily accessible to Conchologists in general) as useful as they have been to myself, I induced Mrs. GRAY to make slight etchings of them, which afforded her an interesting occupation when she has been confined to the house by ill health.”

Rather condescending, as I suppose befits a Victorian husband, but Mrs. Gray’s work lives on, and you can look at or download her books at the Biodiversity Heritage Library. Below is a sample from volume three. 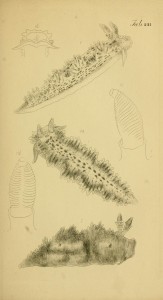