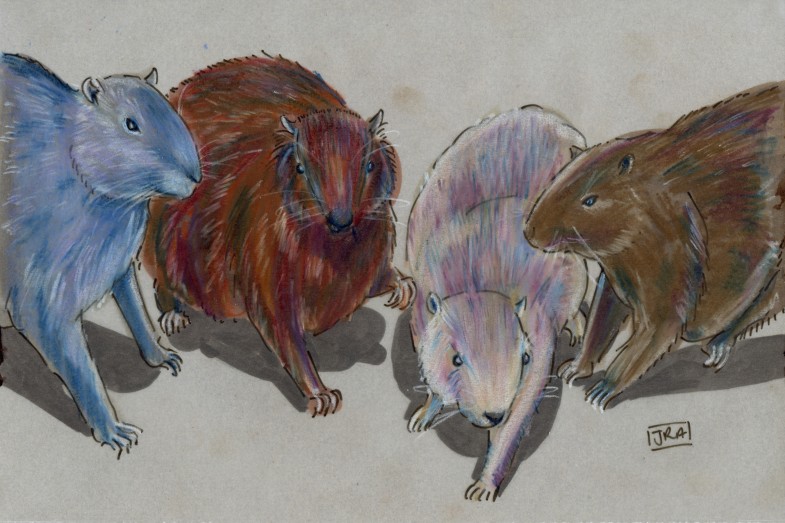 Hutias are largish rodents that live only in the Caribbean. While 26 hutia species are known to have lived in historic times, we only have seven species left, thanks probably to hunting, habitat changes, and the introduction of predators to the hutias’ island homes. Hutias live mostly in foresty or rocky areas, and they eat mostly plants, along with some smaller animals like lizards. The hutias seen in this drawing, from left to right, are Geocapromys ingrahami, the Bahamian hutia; Geocapromys brownii, the Jamaican hutia; Capromys pilorides, the Cuban hutia; and Plagiodontia aedium, the Hispaniolan hutia.

The Bahamian hutia is listed as vulnerable by the IUCN and is considered endangered and protected by law in the Bahamas. It lives on coral atolls and likes to eat fruit and seaweed. The IUCN also considers the Jamaican hutia vulnerable. The Jamaican hutia is nocturnal, and while none of the hutias are particularly well studied or understood by scientists, the Jamaican one may be the most mysterious. The Cuban hutia is not endangered, not yet anyway. It’s good at climbing trees, but it prefers to stay close to the ground. Like my dogs, Cuban hutias engage in playful wrestling and tumbling about together. Finally, the Hispaniolian hutia: it’s listed as endangered by the IUCN (one step worse off than vulnerable). While this hutia is also pretty mysterious, scientists think it’s nocturnal and good at climbing.

It’s likely that the first meat Christopher Columbus ate in the New World was a hutia. Archaeologists have found much evidence indicating that hutias were an integral part of the pre-Columbian diet, and they’re still hunted for food in some areas. If you have an entrepreneurial bent, you may like to read this excerpt from Microlivestock: Little-Known Small Animals With a Promising Economic Future that focuses on the hutia and its potential as a farm animal.

With this drawing, rodents are 27 percent of Daily Mammals and 40 percent of actual mammals. The rate is improving, but there are still many, many rodents to draw!