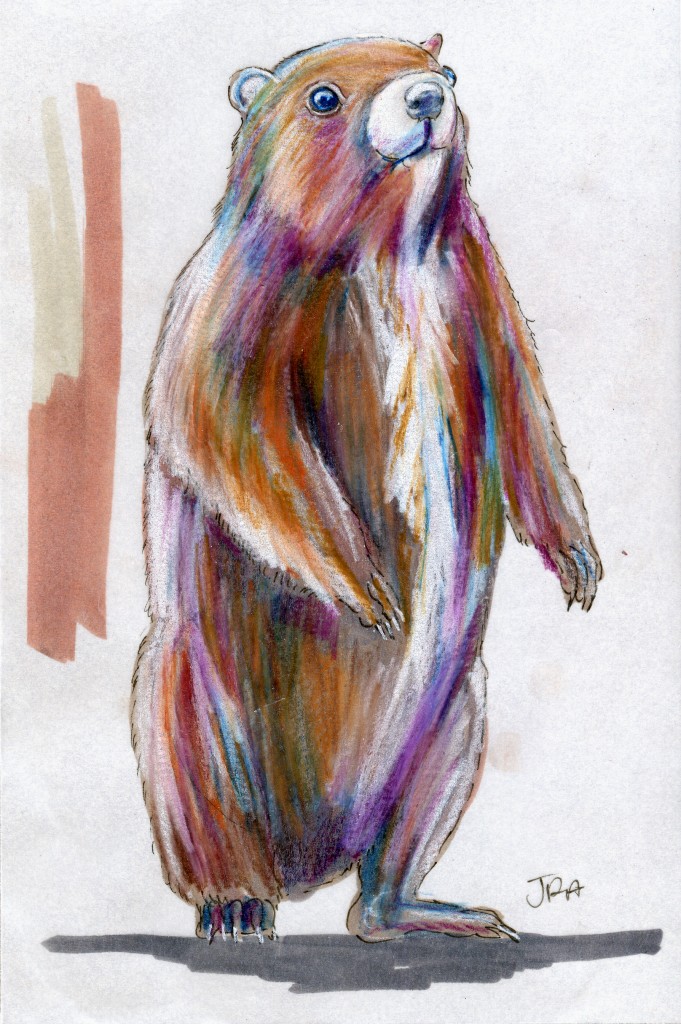 It’s the middle of winter, and although I can take naps, I can’t do what I’d really enjoy, which is hibernate. The next best thing is to celebrate hibernation, torpor, and estivation of other mammals. And let’s start by clearing those up, in case, like me, you didn’t know the differences between them. Here we go:

This week, I’ll be drawing and writing about animals that practice all three of these kinds of dormancies (I think…), so I’ll be using the word “hibernator” not in its pure sense but to mean torpor or dormancy. Okay? Okay.

Now. Our marmot here is a true hibernator. In the winter, marmots’ hearts beat only three or four times a minute! Three…or…four…times…a…minute. So slowly. This species hibernates in its burrows from October to May. So right now, Vancouver Island marmots are snoring sweetly underground, snug as can be.

Seriously. This guy is one of the most endangered mammals in the world. Confined to just a few mountain areas of their Canadian island—and nowhere else in the world—the marmots have been victim not just to deforestation directly, but also to the effects deforestation has to the balance of the Vancouver Island ecosystem in general. It seems complex, but basically, the logging industry makes some areas more appealing to marmots than they should be, and they turn out to be very ill-suited to hibernation. And the logging destroys other animals’ habitats, meaning the predator/prey relationships on the island are screwy, and now the marmot is more vulnerable than usual to its natural predators.

Like other marmots, the Vancouver Island variety has a sophisticated communication system consisting of a number of different kinds of calls. (The Mammalian Species account of the marmots says that their whistles have three harmonics, a variety of durations, and changing intensities.) You can hear some of their calls at this page from UCLA. (Your dog may take an interest, too.)

The 2010 Winter Olympics will be in Vancouver, and the games have a better-than-usual set of mascots, including a Vancouver Island marmot “mascot sidekick” named Mukmuk.

The Marmot Recovery Foundation is working to save the Vancouver Island marmots from extinction. The group operates a captive breeding and reintroduction program that is showing some success. Its website has some other information and photographs of the marmots, too.