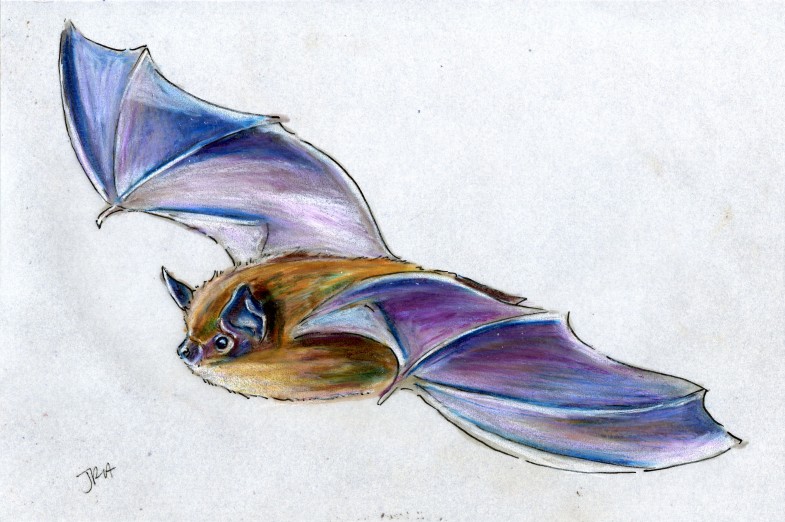 This little brown bat, called the little brown bat—like our moon is called the moon—is quite a common fellow throughout most of North America. It eats a ton of insects every night—okay, not a ton, but at least a couple of grams, which is a lot for a little brown bat! It favors aquatically inclined insects, but will also munch moths and mayflies. It hunts through the night, coming out at dusk and returning home just before dawn.

The little brown bat is a true hibernator, but even true hibernators have to wake up occasionally. This guy, for instance, will hibernate for between a couple weeks and a few months at a time, repeating as necessary from fall to spring. Waking up occasionally may be a way for the bats to correct metabolic problems that arise from the very low body temperatures they maintain during hibernation. Hibernating little browns lose about half of their body weight and drop their body temperatures to about 10ºC (50ºF). Besides hibernation, little brown bats can use torpor, too (see yesterday’s post if you’re confused here!), on a day-to-day basis to conserve energy after fruitless, or rather bugless, nights of hunting.

Sadly, all is not well for the little brown bats currently hibernating in the northeastern United States. They are being ravaged by a strange disease called white nose syndrome. It first appeared in 2007, and it affects several species of bats in their hibernation roosts. Little brown bats, though, are sustaining the most deaths from the illness, which appears to involve a cold-loving fungus. The most obvious initial symptom is a fuzzy white growth around the nose and sometimes on the wings or other parts. Afflicted bats act very strangely, coming out of their roosts in the middle of day and the middle of winter. They seem to be starving and sometimes try to drink snow. And then they die.

The syndrome was first observed in upstate New York and has since spread to five other states. Just last week authorities confirmed the first cases of white nose syndrome in Pennsylvania and New Jersey. No one knows what’s causing it or how it’s spread…but it is spreading. Hundreds of thousands of bats have died from it over the last two years. The mortality rate in many affected caves is more than 90 percent. If we don’t figure this out, there’s a possibility that cave-dwelling bats, such helpful insectivores, could become extinct in the very near future, which would in turn have a catastrophic effect on the ecosystem.

There are two funds you can donate money to if you’d like to try to help the bats, one at Indiana State University and the other through Bat Conservation International.