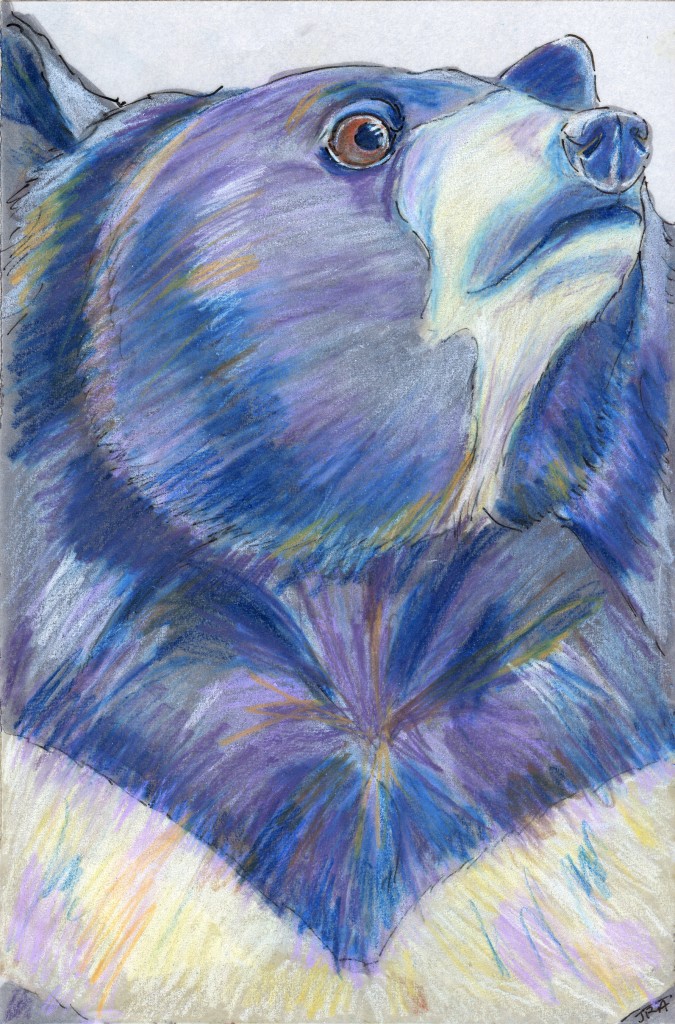 Today is the last day of Hibernators Week at the Daily Mammal, so I’d like to introduce you to a bear, that classic hibernator. This particular bear is an Asiatic black bear. It lives in forests in several countries in southern Asia, including China, Japan, Iran, and Pakistan, among others. In the northern parts of its range, it hibernates, filling up on acorns and seeds to put on fat before time to head into the den. In the south, only females who are going to give birth in the winter hibernate.

IUCN classifies this bear as vulnerable, which is the last stage before endangered. Unfortunately, the Asiatic black bear is extensively hunted for its paws and its hide, and it’s a victim, like nearly everyone else, of habitat destruction. But the biggest and most upsetting threat to the Asiatic black bear is the “traditional medicine” industry. I knew that bear gall bladders were used in traditional Chinese (and Korean, Vietnamese, and others) treatments, but not until just now did I know just how terrible this is—not until just now did I think about it, I’m sorry to say.

In “traditional medicine,” a bears’ gall bladders and the bile they produce are used to treat hemorrhoids, pinkeye, impotence, headaches, heart disease, and more. Wild bears are hunted and their gall bladders taken. In 1980, informing us that this would reduce the number of wild bears killed, China began allowing bears to be “farmed” for their bile. (It didn’t reduce the number of bears being hunted in the wild. Instead, it made wild bear bile more valuable.)

And this is where it gets really, realy ugly. The “humane” method of harvesting the bears’ bile is to create a permanent hole in the bear’s abdomen and gall bladder, through which the bile drips. Other methods include metal catheters, repeated surgeries, and metal jackets. The bears on the “farms” are kept in cages not much bigger than they are. Their teeth and claws are pulled. They moan in pain, banging their heads on the bars of their cages. They live in terror and agony. This can go on for their entire lifetime: 25 years. Of pure torture. And there are thousands of bears undergoing this abuse right now.

It’s enraging, cruel, disgusting, and inhuman. And it’s also completely unnecessary. Not only does “traditional medicine” recognize a range of herbal substitute for bear bile, but Western medicine has synthesized the compound that gives the bile what healing capacity it has. (An acid in mammalian bile is especially concentrated in bears. This acid can help treat some liver ailments. But again, no one needs to take it from bears, and there’s no rational reason to think it can help a headache or hemorrhoids.)

When I added the Asiatic black bear to my list of hibernators for this week, I was just thinking about how fun it would be to draw a big, furry bear. Now I’m angry. Today, the Associated Press reported on a rescue of 12 Asiatic black bears from years of torture on a “farm” in China. They were suffering from liver tumors, blindness, and ringworm, and some of them were compulsively biting the bars of their cages. The group that rescued them is called Animals Asia, and you can help it rescue bears through a donation. If you knit, there’s another way you can help. The bears need surgery after their rescue, and they need to keep warm when they’re under anesthesia. Knitters are helping them by making big old bear mittens for them to wear. You can find out more at this site, and you might also like to read the Animals Asia blog about its rescue efforts.