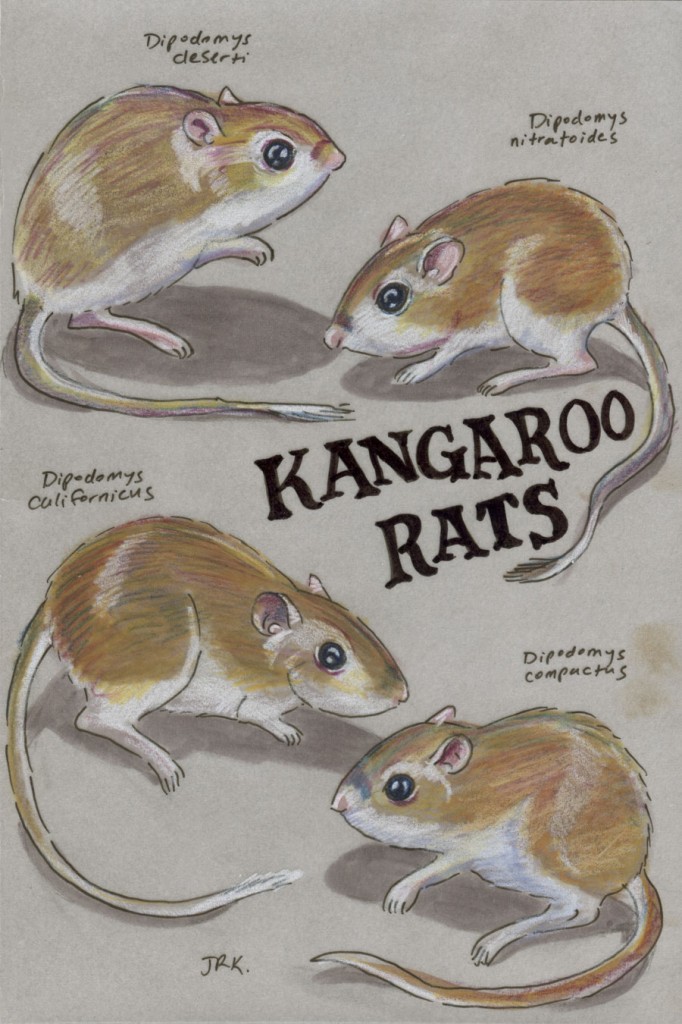 Last week, the Daily Mammal Facebook page reached 100 likes. In fact, today it has 123! To celebrate this triple-digit milestone, I’m going to draw a mammal (or a few, like today) from each country that one of the likers lives in. As of right now, there are 102 mammals who like the page in the United States, three in Japan, two each in three more countries, and one each in 11 more. (That adds up to 122, so one person’s country is indeterminate, I guess.) If I get likes from other countries before I’ve covered all of these, I’ll add them to the list and keep going. If you haven’t liked the Facebook page yet, you might want to: it’s a good way to keep up with when I’m drawing and when I’ve slacked off. Head on over there and share it with your friends.

We’ll start with the United States, and specifically the western United States, where I live. Here are four representatives of the Dipodomys genus, which is the kangaroo rats. I think kangaroo rats are quite charming and endearing, and they’re desert animals, which I love, but I don’t usually draw them very well, so I decided to get a few of them done at once. And what do you know, I don’t hate the results!

The species are all so similar in appearance that I had to find some good descriptions of them and take notes. My notes are filled with such words as pelage, venter, fulvous, and hallux. I love throwing around the jargon, but I confess I ignored baculum length, which it turns out can be a good characteristic to observe if you’re trying to differentiate kangaroo rat species from one another. I even found a flow-chart of sorts (PDF)—or maybe it’s more like a Choose Your Own Adventure thing—that you can use to try to determine what kind of kangaroo rat you have on your hands: Does it have four or five toes on its hind feet? What’s the width of its zygomatic arch? Are you east or west of the Sierra Nevadas? Are the lower incisors more like awls or chisels? Each answer you give branches you off to a new question, until finally, bingo, you’ve figured out you’ve got a Dipodomys panamintus or whatever. Even so, my drawings all look pretty much the same. One of their tails isn’t crested, and one of the tail crests isn’t white.

Top to bottom, these fellows are D. deserti, the desert kangaroo rat, who lives in the southwestern United States and into Mexico; D. nitratoides, the Fresno kangaroo rat or San Joaquin kangaroo rat, found around the San Joaquin Valley in California; D. californicus, the California kangaroo rat of northern California and southern Oregon; and D. compactus, the Gulf Coast kangaroo rat, which you might meet on the Tamaulipas, Mexico, barrier islands, Mustang and Padre Islands of Texas, or mainland Texas near the Gulf Coast. All of the species are rated Least Concern by the IUCN except D. nitratoides, which is rated Vulnerable, and a couple of its subspecies are endangered enough to be protected by the federal government and the state of California.

Kangaroo rats have external cheek pouches that are lined with fur, which they use for transporting seeds and nest-building materials. The soles of their feet are furry. They’re very well adapted to living in dry places. They build burrows in the sand, and they can survive on little to no water, getting the hydration they need from the food they eat, which is mostly seeds.

Stop by tomorrow to meet a mammal from another country where a Daily Mammal reader lives!