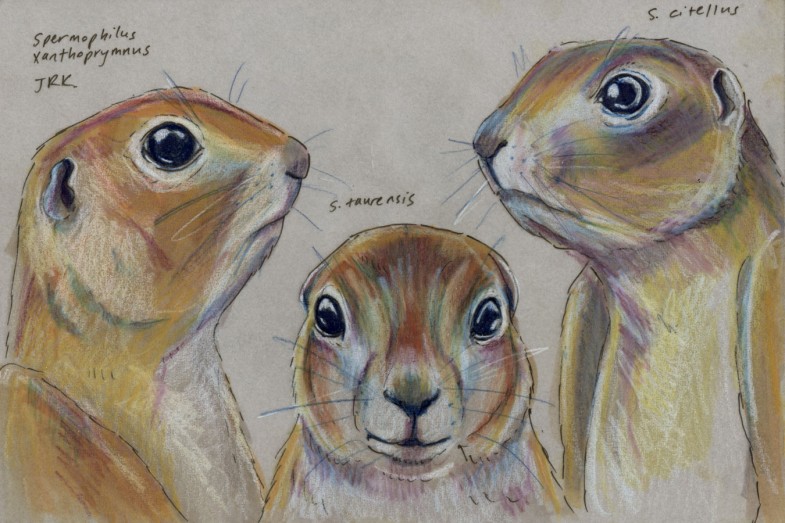 S. xanthroprymnus lives in Armenia and Iran as well as Turkey and is considered vulnerable to becoming endangered because it’s losing habitat to agriculture. S. taurensis lives only in the Taurus Mountains, in Turkey, at elevations above 1,000 meters (3,280 feet). It only became a species in 2007. Before that, it was considered part of the S. xanthroprymnus species. (This genus in general seems to be in a state of taxonomic flux.) S. taurensis is not in any danger of extinction because it lives in such remote, mountainous places. S. citellus lives in Austria, Bulgaria, the Czech Republic, Greece, Hungary, Macedonia, Romania, Serbia, Slovakia, Ukraine, and, of course, Turkey. It is also vulnerable because of habitat destruction. It’s pretty picky about where it lives. In parts of its range it has become extinct, and in others it’s restricted to golf courses, sports fields, and airstrips, where it depends on the kindness of humans to remain. It doesn’t sound like a sustainable existence.

These three species have a few differences that are easily visible to a trained observer: S. taurensis is more reddish than the other two, and S. citellus has a yellower underside. S. citellus is usually a little smaller with a longer tail, and only S. taurensis has a tail with a black tip. However, to be really sure what species you’ve got, you have to turn to genetic analysis or something I’ve just learned about called geometric morphometrics, which would involve, in this case, comparing the positions of various bones in their skulls.