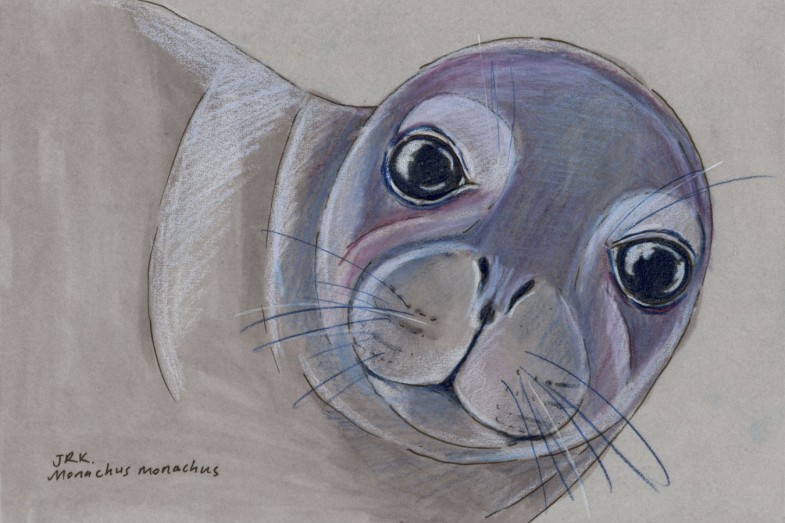 To celebrate the Daily Mammal Facebook page reaching 100 likes last week, I’m drawing a mammal from each country where one of the likers lives. This mammal, the Mediterranean monk seal, represents Greece, and it is one of the world’s most endangered mammals and the most endangered seal. Only about 400 Mediterranean monk seals are left, in fact, and the IUCN lists it as Critically Endangered, the last step before Extinct in the Wild. It has disappeared from many places where it used to be abundant, and the remaining population is fragmented.

Only around 50 percent of Mediterranean monk seal pups survive the first two months of life. They’re killed by storms and high tides, but also, perhaps, because of genetic problems resulting from inbreeding, which I suppose is inevitable when a species’ population is so small. The most dangerous threats to the seal’s existence include entanglement in fishing equipment, persecution by fishermen who consider it a pest, overfishing that depletes the seal’s food supply, habitat loss from tourism, and disease.

Homer, Aristotle, Plutarch, and Pliny all wrote about the Mediterranean monk seal. It was depicted on early coins from Phocaea (a city that may have been named after the seal), and according to the Hellenic Society for the Study and Protection of the Monk Seal’s “Report on the Status of the Mediterranean Monk Seal in Greece” (PDF), archaeologists unearthed the remains of a Mediterranean monk seal along with the bones of a human family from an ancient tomb in Rhodes. After a long and storied association with humans, including not only allusions in our epic poetry but also deadly interactions with our fishermen, the Mediterranean monk seal is now relying on us to save it from oblivion.