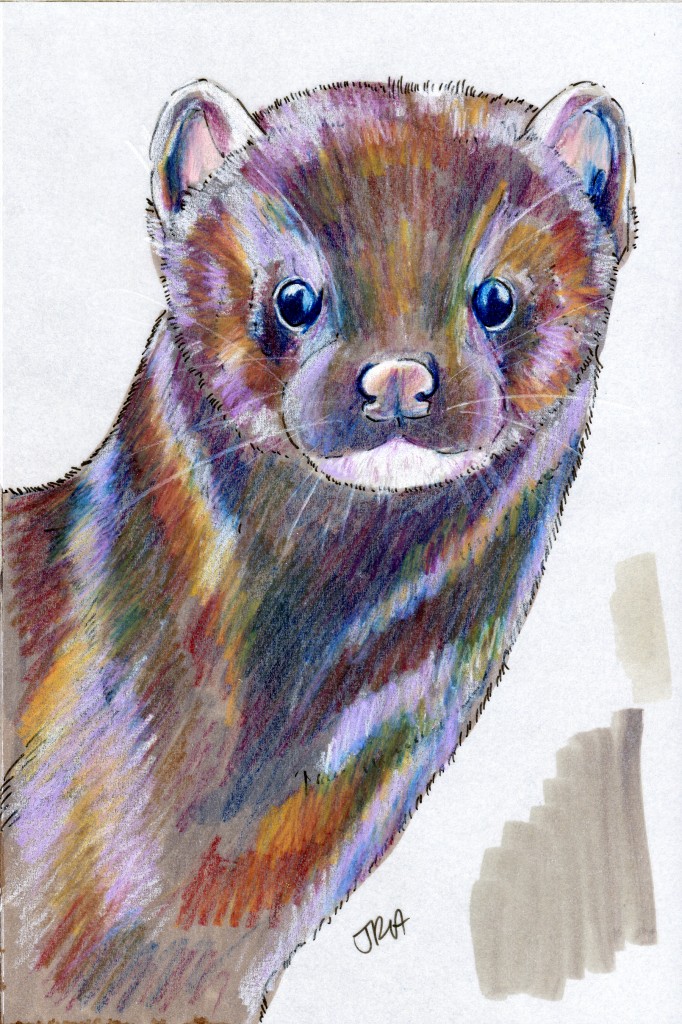 Welcome, readers of the Blog for Darwin blog carnival! (A blog carnival is a collection of posts from different blogs but on the same topic. I’m participating in one that compiles posts related to Darwin today through the 15th. Click the link above to read some of the other bloggers’ posts.) At the Daily Mammal, we’re celebrating Charles Darwin’s 200th birthday (today! happy birthday!) with a look at some of the mammals that Darwin mentions in his Origin.

Chapter Six of Origin is dedicated to answering some of the problems that Darwin anticipates people finding with his theory. One of these issues is the seemingly amazing perfection of certain natural structures, like the eye, and the incredulity with which people consider that such perfection could arise gradually through natural selection. Another is the apparent lack of transition species: if species are always changing one into another, why don’t we see all kinds of transition species, both now and in the fossil record? And how is it even possible that, for instance, a land animal could evolve into an aquatic one? How would the transitional species in between have lived?

That’s where this fellow, the American mink, comes in. Darwin writes:

“It would be easy to show that within the same group carnivorous animals exist having every intermediate grade between truly aquatic and strictly terrestrial habits; and as each exists by a struggle for life, it is clear that each is well adapted in its habits to its place in nature. Look at the Mustela vison of North America, which has webbed feet and which resembles an otter in its fur, short legs, and form of tail; during summer this animal dives for and preys on fish, but during the long winter it leaves the frozen waters, and preys like other polecats on mice and land animals.”

So, taking this mink as an example, if certain traits that lent themselves to living in the water began to be an advantage in the struggle for survival—say, water levels rose or predators pushed the minks out of their normal territory into one more waterlogged—the minks that were better adapted to aquatic living would be more likely to survive and reproduce their genes. And with successive generations, these characteristics would be strengthened, and as more and more minks were born with these adaptations, they would through greater numbers eventually take over, and perhaps we would have a new species. At least that’s this laywoman’s interpretation of the idea. Another example:

“In North America a black bear was seen by Hearne swimming for hours with widely open mouth, thus catching, like a whale, insects in the water. Even in so extreme a case as this, if the supply of insects were constant, and if better adapted competitors did not already exist in the country, I can see no difficulty in a race of bears being rendered, by natural selection, more and more aquatic in their structure and habits, with larger and larger mouths, till a creature was produced as monstrous as a whale.”

Another thing to ponder is the way humans, through hunting, for instance, are creating unnatural selection. A recent study found that as bighorn sheep are hunted for their gigantic, beautiful, curling horns, those with smaller, less impressive horns are more likely to survive and reproduce. The result seems to be a decrease in horn size across the population. And since it seems that those bighorns with the biggest horns are also the most healthy and strongest, hunters are creating a weakened population. Some are calling it “evolution in reverse.” Perhaps we would have seen something like this in the minks if fur farms hadn’t overtaken the hunting of wild minks, and if trappers and mink hunters could selectively trap and hunt only the minks with the lushest coats.

Mink are fairly solitary and fairly nocturnal. They live in burrows beside rivers and they dine on crayfish and frogs in the summer, as Darwin noted, and small mammals like shrews and rabbits in the winter. Sometimes they use fur from their prey to line their dens. They are good at swiming, diving, and climbing.