The second Daily Mammal 24-Hour Mammal Extravaganza is coming April 19! Reserve your own special mammal now: just click the “donate” button in the right-hand navigation bar. Get an original, custom-made work of art and help animals at the same time! 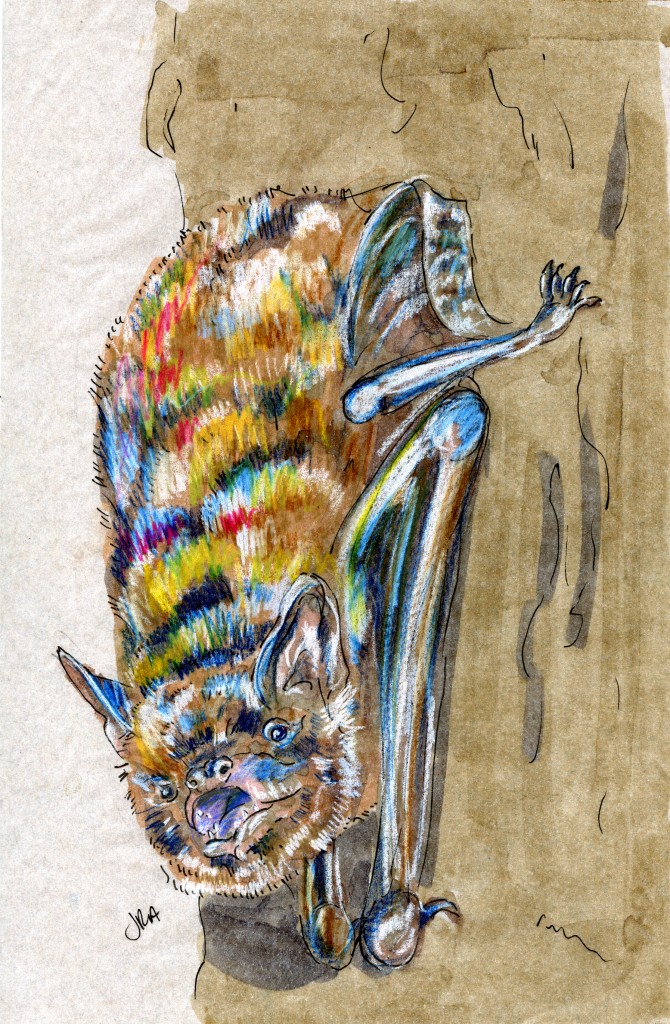 Today is the inaugural installment of a new periodic Daily Mammal spotlight feature, which I’m calling Daily Mammal Now. (I admit that I got the idea from Dr. Phil’s “Dr. Phil Now.” I just don’t have the newsy-sounding arrangement of my theme song to play for these special “Now” episodes. In fact, no theme song at all.) Daily Mammal Now (like Dr. Phil Now) will focus on mammals that have been in the news. If you see a mammal in the news, please drop me an e-mail or comment on this site to tip me off! Get the scoop if you have a nose for news!

A couple of weeks ago, the New York Times ran an article called “Bats Perish, and No One Knows Why.” Alarmingly, certain populations of bats in New York, Vermont, and Massachusetts have been stricken with what they’re calling White Nose Syndrome. Is it a virus? Is it caused by exposure to a toxin? Is it bacterial? Well, no one knows. What they do know is that it makes the bats very thin and sometimes spotted with a white fungus. Since last winter, it’s been killing bats who should have been peacefully hibernating. Instead, they’re staggering out of caves and mines in broad daylight in the dead of winter and dropping dead. One scientist quoted in the article calls them “dead bats flying.”

This particular bat, the Indiana bat, has been on the federal endangered species list for four decades now. The major threats to its survival are human-caused: commercialization of the bats’ cave habitats, pesticides, “human disturbance,” and the like. While some Indiana bat populations seemed to be on the upswing, now White Nose Syndrome threatens to knock them back down again. Scientists fear that the syndrome could cause extinctions of several species.

The phenomenon reminds me of Colony Collapse Disorder, the mysterious catastrophe that has been killing bees, and the lethal fungus that attacks frogs. Unlike Dr. Phil on his topics, there’s not much I can say about these strange syndromes. I’m baffled, and all I can do is read the news and see what happens. What do you think?