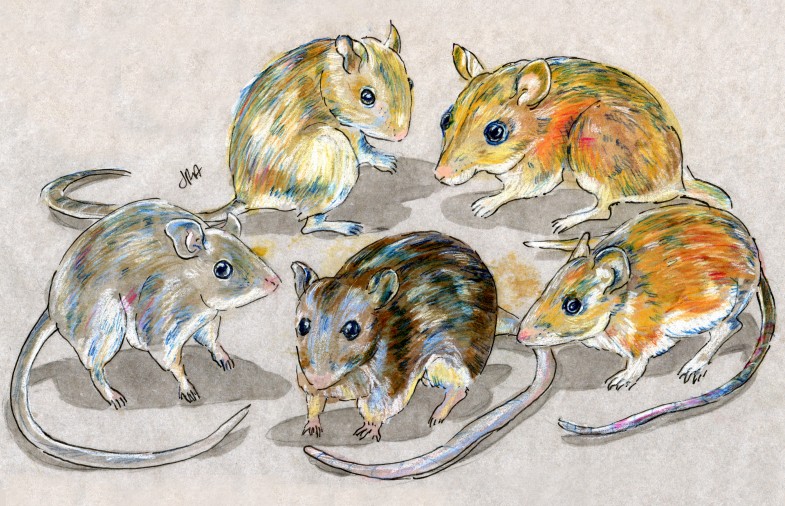 Those of you who have been following the Daily Mammal from the start know how daunting the rodents are. Nearly half of the 5,000 named mammal species are rodents, and as Ivan T. Sanderson says in Living Mammals of the World, “whole slews of these look almost exactly alike.” Not only are there are thousands and thousands of them, something I had not considered when I decided to begin this project, but there aren’t very good photos of a great many of them. A while back, I drew a set of five sleeping dormice, and found it heartening to check several rodents off the list at once. Here’s another of those multi-mouse drawings. This time we’re tackling five deer mice (major hantavirus carriers), of the Peromyscus genus.

I didn’t have photographs of a single one of these mice. Instead, I had photographs of Peromyscus species that are much more common in the US, and I had very detailed descriptions of these five species from the species accounts in Mammalian Species, which I download in PDF from Virginia Hayssen’s website. Now, let me tell you, I do not as yet speak the language of zoology, but I’m going to learn it. There are standard names for describing animals’ fur, or pelage, as we mammalogists call it: ochre, buffy, tawny, and a wash of brown may all mean tan to you and me, but not to those whose eyes are trained to discern the nuances. Would my biologist readers let me know where I can get a chart or something that shows what those colors really are? I read that Munsell Soil Color Charts are used for describing pelage—is that where these names come from? I’d like to know.

Anyway, in drawing these mice, I had only the scientific descriptions to go on, and only my experience with acrylic paints to help me decipher the meaning of the colors. (Well, that and the fact that I’ve known three cocker spaniels named Buffy.) Here’s where you come in.

CONTEST: I’m going to type, below, some hints from the descriptions of these mice. The first person to identify in a comment to this post which of the five is which wins this drawing, matted and ready for framing. Ted is not eligible. Here we go.