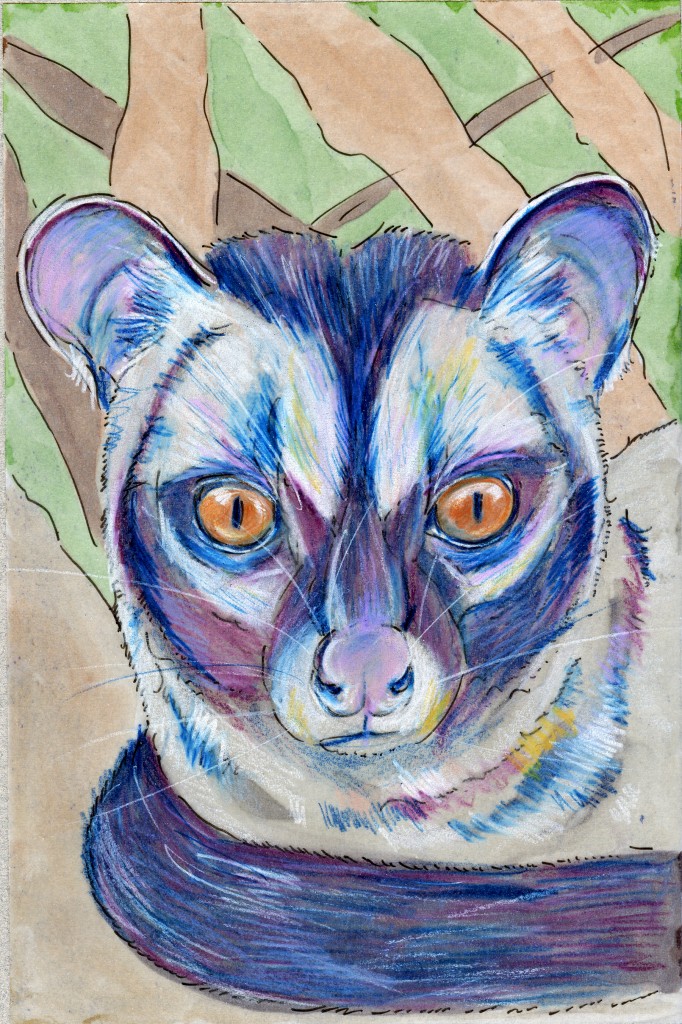 Here is a common palm civet, which is also called an Asian palm civet or a toddy-cat. That second name comes from the civet’s supposed habit of drinking the palm wine, or toddy, that people had left in cups to ferment, or possibly eating or drinking naturally fermented palm fruits. I wonder if they got drunk; perhaps the one in this drawing is about to sleep it off in the trees.

There are several interesting things to know about this civet, which lives in central, south, and southeast Asia. The most interesting may be its role in producing civet coffee, also called kopi luwak. Have you heard of this? Here’s how it works: palm civets, either in the wild or on farms where they’re kept for this very purpose, go about their ordinary civet business, which involves eating berries and fruit. Among the things they like to eat are the berries of the coffee plants that have been introduced into their range.

Well, it turns out that coffee beans harvested not from coffee plants but from civet poop, after they’ve gone through the civets’ digestive system, make allegedly very delicious cups of coffee. And since every pound of civet poop produces only about five ounces of coffee beans, and there are only so many civets and civet-poop sifters in the world, only 1,000 pounds of kopi luwak are produced worldwide each year. And since only 1,000 pounds of kopi luwak are produced each year, and since it’s supposedly so delish, civet coffee is one of the most expensive kinds of coffee in the world. A pound of it costs well over $100. Here’s a video on YouTube about a California coffee shop that sells kopi luwak for $65 a cup.

Why is it so good? Well, my friend Ramona tasted it at a Santa Fe dinner party, and she said it was really no better than Dunkin Donuts to her palate (which I consider fairly cultured). But to those who think it actually is amazingly scrumptious, there exist a couple of theories as to why. For one thing, it could be that the civets are just good at picking the ripest coffee berries, and so picking the beans out of their poop rather than off the plant means they’ve already gone through a quality-control process. In that case, the civets that are raised on farms and fed berries picked by people would not necessarily produce especially good coffee. It could also be that the enzymes in the civets’ digestive systems alter the chemical composition of the beans in some way, making them less bitter.

I would drink a cup of kopi luwak harvested in the wild if someone else bought it for me, but in the meantime, perhaps I’ll start a counterfeit or knockoff kopi luwak company with new labels pasted over sacks of beans from Dunkin. I wish I could say I had come up with this pun myself, but instead I’ll just repeat it: kopi luwak is good to the last dropping. Here’s a source if you feel like shelling out $180 for a pound, but I can’t vouch for its quality or authenticity. (Before you try it, you might also like to know that civet anal glands excrete a disgustingly foul-smelling—and tasting?—substance as a defense mechanism.)

Even though they’re so good about providing us with ABC coffee beans, the common palm civets have had to act as our scapegoats, too—or rather, the Chinese government’s scapegoats. During the SARS epidemic, in 2003, some researchers decided that the disease was transmitted by common palm civets and China began culling them, killing thousands in a bid to eradicate the disease, and then boasting that they had succeeded when SARS disappeared in 2004. Well, now scientists believe that bats were the real culprits, and that the disease the civets had was transmitted from humans. So yes, we gave them SARS (or the civet equivalent), and then we killed them for it.

Common palm civets are also killed as pests and caught as pets. We have a complicated relationship with this creature.