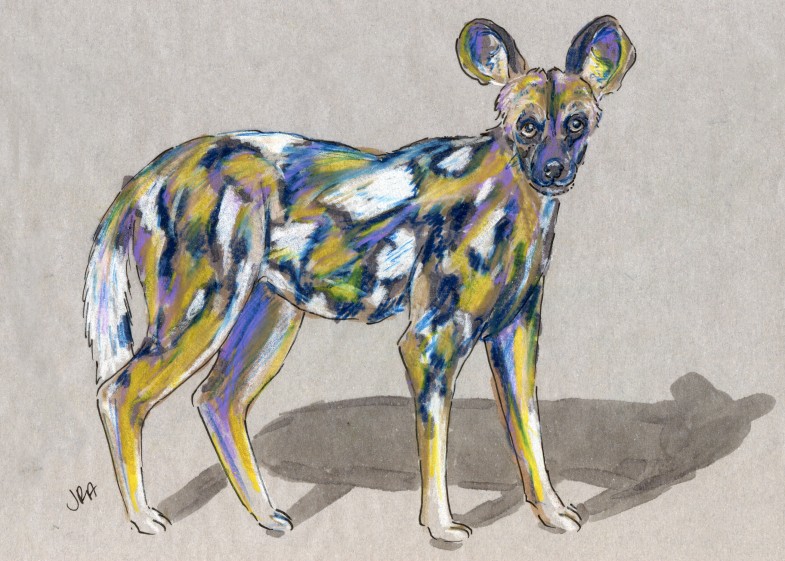 This African wild dog with big round ears and thin, mottled fur uses abandoned aardvark holes as dens to bear its pups. It lives in packs of around 10 dogs. Cape hunting dogs have what Walker’s Mammals of the World calls “a largely undeserved reputation as an indiscriminate killer of livestock and valued game animals,” which means, of course, that people have tended to take whatever opportunities they could to kill the dogs. This, combined with the usual habitat loss that’s threatening animals all over the world, means that the Cape hunting dog is quite endangered. Another quote from Walker’s:

Considering its immense former distribution and its scientific, cultural, and behavioral interest, the prospective disappearance of this genus from the wild at a time of supposed increasing emphasis on conservation values must rank as one of the great wildlife tragedies of the late twentieth century.

PDF of a very short piece from the May 14, 1880, New York Times about the Cape hunting dog at the London Zoo. Sample quote:

It is a queer beast, with shifty ways that give it an appearance of irresolution and occasionally of crazy bewilderment, induced, no doubt, by the consciousness that its features justify its being looked upon as neither dog nor anything else, but something half-way toward the first hyena and about as far from the last wolf.”