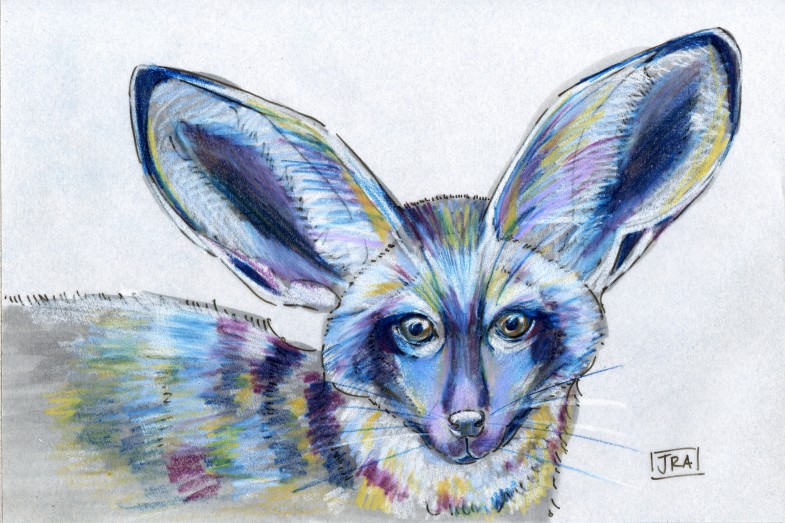 Well, that’s an apt name! This fox (whose scientific name translates into something like ear-dog big-ear), lives in two separate areas of Africa that are about 1,000 km (621 miles) apart. One is in the eastern part of the continent, ranging from Ethiopia and southern Sudan to Tanzania, and one is in the south, from southern Angola to South Africa. Depending on where they live, bat-eared foxes eat insects, other arthropods, rodents, birds’ eggs, and plants. They’re especially keen on termites and dung beetles.

Besides those extra-large ears (which they use for sending each other visual signals as well as for hearing, and I wouldn’t be surprised if they serve a cooling purpose, too, out there in the desert), the bat-eared fox has unusual dentition, which means the arrangement of its teeth. May I throw around some more mammalogist jargon just to impress you? The bat-eared fox has more teeth than any other placental, heterodontal mammal. That means it has a lot of choppers. Okay, specifically, it has the most teeth of all of the non-marsupial mammals that have kinds of teeth that are different from each other. For instance, humans: we’re placental with heterodontal dentition. But our pieholes are not nearly so crowded with the ol’ pearly whites.