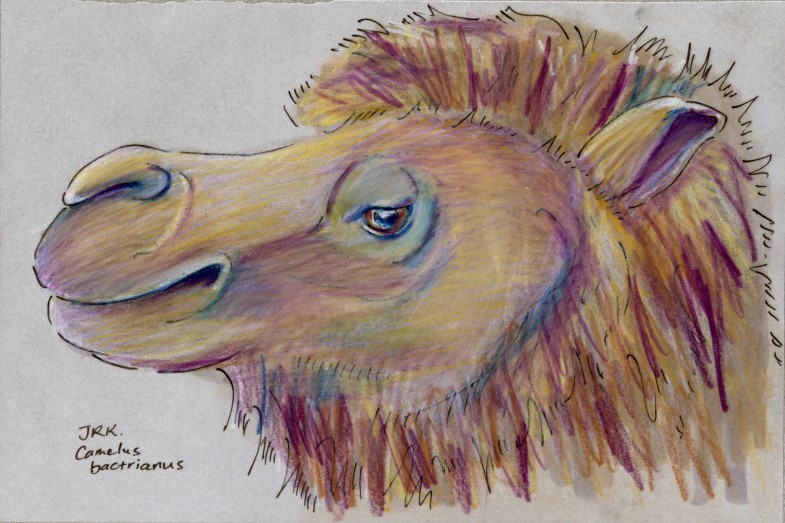 The Bactrian camel is the one with two humps. The Arabian camel or dromedary has only one hump. You can remember that by imagining the capital initials of their names turned on their side: B for Bactrian has two humps, and D for dromedary has one. (I didn’t come up with that, I read it on Ultimate Ungulate.)

Then again, maybe you don’t think there are two types of camels, not really. As far as I can tell, some scientists agree with you, believing that both the one-humps and the two-humps were originally one species. They can interbreed, but it’s possible that males born as a result are sterile. Then again, you may think that there are two kinds of Bactrian camels: domesticated ones, which you’d call Camelus bactrianus, and wild ones, which you’d call Camelus ferus. That distinction might make a bigger difference than you’d think. There are no Arabian camels/dromedaries in the wild, and fewer than 1,000 Bactrian camels in the wild. The International Union for Conservation of Nature and Natural Resources (IUCN) categorizes this camel (under the name C. ferus) as Critically Endangered, the last category before Extinct in the Wild, which is followed, of course, by plain old Extinct.

The reasons for their looming extinction in the wild are mostly human-related. Fifty or so are hunted each year for meat, and when there are only 1,000 of something, taking away 50 is a big deal. Much of their habitat—which by the way is in the rocky, sometimes very cold and sometimes very hot Gobi Desert of China and Mongolia—is being taken up by the raising of domesticated animals (including domesticated Bactrian camels). And continuing droughts, which some might call human-related if they’re connected to human-caused climate change, mean that wolves are increasingly preying on the camels. A human-related situation that actually hasn’t seemed to affect the camels is that part of their range was China’s nuclear-testing area for 45 years. It’s nice that that didn’t bother them, I suppose.