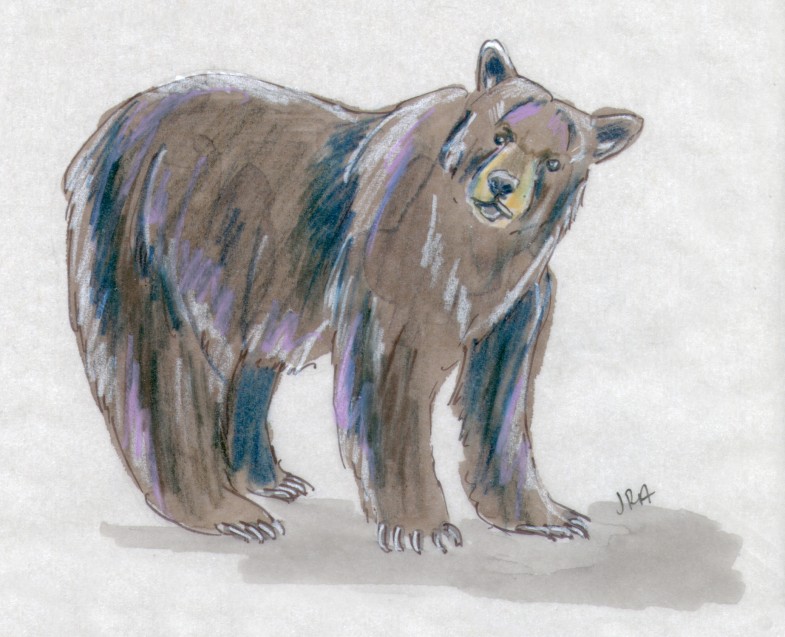 The mammals are back! After a hiatus in which I bought a house, moved into it, and wrote a novel, I have returned to mammalography with a renewed commitment to reaching my goal. Thank you for your support, and please stay tuned for an announcement later this week about a special Daily Mammal event.

This fellow here is a black bear. They live throughout North America, in pretty good numbers overall, although they have declined a lot in some places. Their coloring seems to vary regionally—in northwestern North America, there are even very pale ones, almost white—and they’re larger in the east, where they don’t have to compete with brown bears.

Black bears don’t truly hibernate because their heart rates don’t slow down that much, but they do “enter a state of lethargy” in autumn, according to my Simon & Schuster’s Guide to Mammals.

Another thing I learned this week is that contrary to all the pro-New Mexico propaganda I’ve cheerfully taken in over the years, the character of Smokey Bear actually came before the real-life Smokey Bear, the black bear cub who lost his mother in a forest fire in Lincoln National Forest in 1950 (and whose first name was Hotfoot Teddy). The fictional character of Smokey debuted in 1944 and was named for a heroic New York firefighter called Smokey Joe Martin. Finally, it should be noted, his correct name is Smokey Bear, not Smokey the Bear.