There certainly is a fierce beast to meet today, but don’t forget that tomorrow is the beginning of the Japan Mammalthon, and Coco and I will be posting original drawings that you can buy, with all proceeds benefiting victims of the tsunamis and earthquakes. Read this post for all the details. 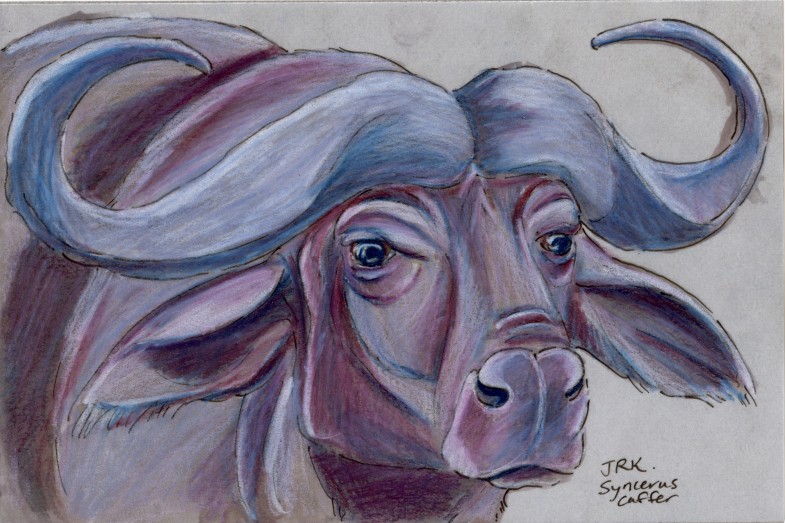 “…[I]t has an unpleasant habit of remaining quietly in its lair until the unsuspecting traveler passes closely to its place of concealment, and then leaping suddenly upon him like some terrible monster of the waters, dripping with mud, and filled with rage. When it has succeeded in its attack, it first tosses the unhappy victim in the air, then kneels upon his body, in order to crush the life out of him, then butts at the dead corpse until it has given vent to its insane fury, and ends by licking the mangled limbs until it strips off the flesh with its rough tongue.”

The African or Cape buffalo provides a fine case study for anyone interested in the human relationship to other mammals. This buffalo, which lives in southern Africa, is one of the “Big Five” specially prized trophy animals for hunters on safari in Africa. The five animals—the others are the leopard, the lion, the rhinoceros, and the elephant—are considered the most difficult and dangerous to hunt, and no more so, I’m sure, than this behorned fellow.

I searched Google Books for 19th-century accounts by naturalists and self-satisfied hunters and found descriptions including “grim and vicious,” “ever sulky and completely inaccessible to any mollifying influences,” “fierce, treacherous, and savage,” “terrible in outward aspect,” “savage ferocity,” and “fierce and malignant aspect.”

Seasoned hunters of the 1800s advise that “unless you are tired of life,” you should not attempt shooting this beast from the front, for it “fears nothing” and is “one of the few animals which seem to cherish the spirit of revenge.” One writer says that its ugly mug is a good illustration of the principle that “the face is the index of the mind or disposition”; another says that the buffalo’s “little fierce eyes twinkle with sullen rays.” Beware, says one chronicler of the ferocious buffalo, for it “will willingly meet the hunter half-way and try conclusions with him.” Wounded buffalo, in particular, are depicted as ruthless in their bloodthirst, power, and vengefulness. As a vegetarian, I particularly enjoyed this comment:

“It is singular that so much malignity should be found in a beast which subsists only on vegetable food; but such is undoubtedly the case.”

Not only are these buffalo depicted as dangerous, they are universally said to be downright homicidal. I read several references to their insanity and treachery. Interestingly, unlike the similar-looking Asian water buffalo, the African buffalo has never been domesticated, at least not successfully. In interviews—or at least press releases—from a couple of years ago, a scientist who published a study pinpointing genetic “regions” connected with domestication mentioned the African buffalo as a particularly hard case, one that might be helped with some sort of genetic modification.

I do not dispute that African buffalo are incredibly dangerous and responsible for many deaths, but I can’t help but think that some of these anthropomorphized accounts of their ferocity are exaggerated by the pomp and bluster of vainglorious “white hunters” who feel compelled to make their “sport” seem as perilous as possible. Hunters still spout the same lines: safariBwana.com, which calls itself “the African hunting authority,” says that the African buffalo is a “worthy hunting adversary” and “one of the only beasts in the bush that looks at you as if you owe it something.” I tried—not very hard at all—to find video of a buffalo attacking hunters, but I didn’t find much to remark on. Anyway, someone who’s being shot by a powerful rifle with a reinforced bullet—because the buffalo has such thick skin—has a right to be angry, even vengeful, if animals ever do feel such emotions.