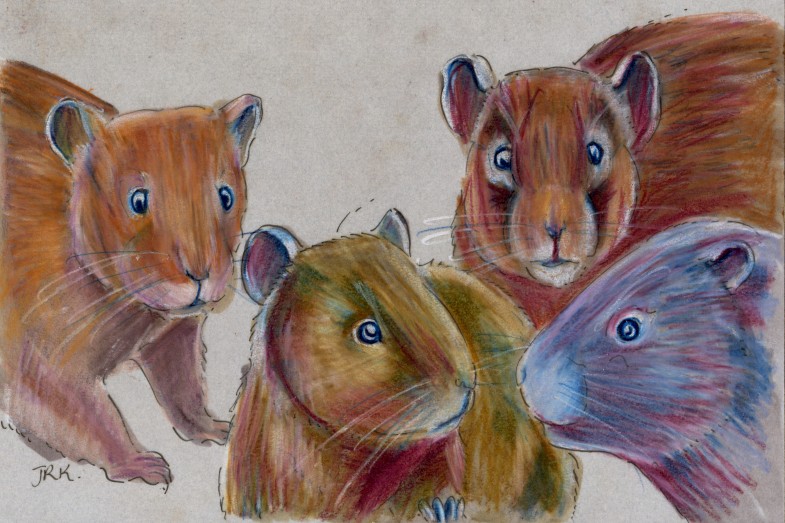 Our last competitors in the mammalian World Cup are these four fellows from Switzerland. Clockwise from the top right, we have the European water vole (Arvicola aquatica), the European snow vole (Chionomys nivalis), the European pine vole (Microtus subterraneus), and the bank vole (Myodes glareolus). Some good news about these guys: they are all widespread throughout their ranges with no major threats, and IUCN classifies them as Least Concern. Yay for the voles!

Switzerland’s soccer team has made it to the World Cup several times, reaching the quarterfinals twice in the 1930s and again in 1954. In 2006, the Swiss team set two World Cup records: they were the first team to be bumped out of the competition without anyone ever scoring a goal against them, and they were the first team to not make a single penalty kick in a shootout. (Ukraine made three against them in the Round of 16, which is how Switzerland was eliminated.) This year, they didn’t make it out of the group stage, although they did shock everyone by beating favorites Spain in their first game of the tournament.

Tomorrow is the final match of the World Cup, and I may miss it because I’ll be traveling, but I won’t miss giving you the results of the Mammals of the World Cup competition! First, we need to wrap up the group results.

Group H was the tayra from Honduras, the pudú from Chile, the Spanish ibex, and today’s four voles (that seems unfair, now that I think about it). The voles might run around underfoot, but they’ll hardly pose a threat. The pudú is tiny. The tayra is the closest thing we have to a carnivore in this group, and the ibex has some mighty horns. So the two mammals continuing on to the Round of 16 from this group are: