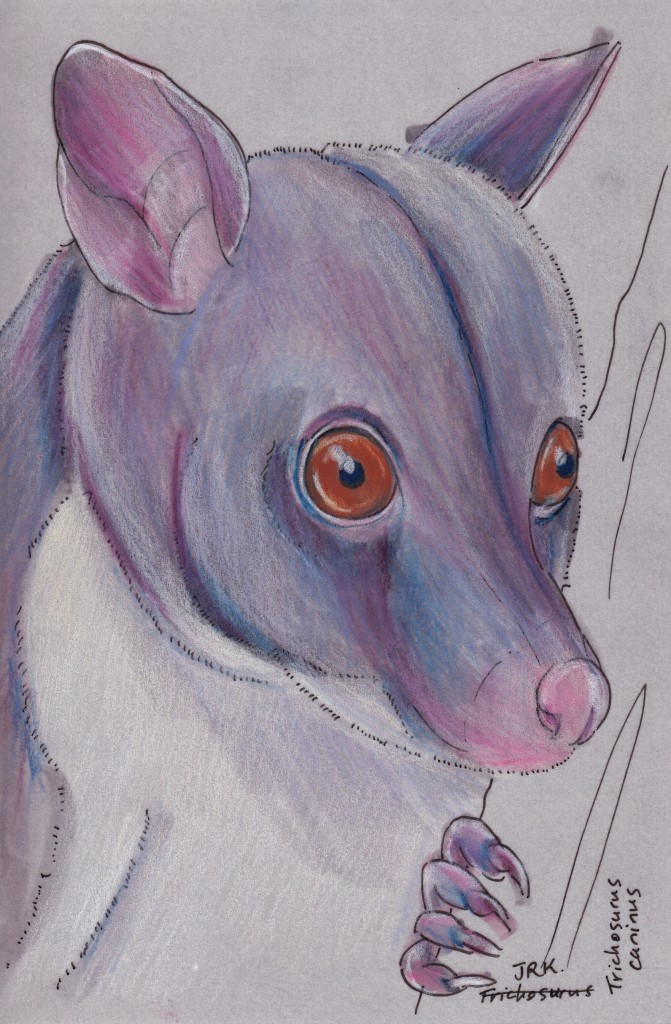 I drew this fellow last week, and just now, sitting down to research him, I ended up tumbling about in my books and online, finding not a lot about the possum—he’s a marsupial who lives in a little-bitty sliver of eastern Australia—but several other bits and pieces somewhat related to the species, which is also known as the bobuck.

For instance, as a spiritual totem, the short-eared brushtail possum could be associated with “mushroom and fungi energy” and both “broadcasting yourself” and “retreating into dark places.” (I don’t mean to sound overly snarky. I’m not into totem animals…at all…well, I don’t know, maybe I am, not in terms of religion or spirituality or trances or deep oneness of the soul, but in terms of affinities and identification, I could get into it. I relate to tree kangaroos and sloths. But I don’t go for the new-agey part of it. Anyway, the woman who runs the above-linked site says she noticed a glut of information about wolves as spirit animals and a lack of attention to marsupial moles, and I love that.) Isn’t the illustration of the possum at that link gorgeous? I quite like it.

Also, I learned that there’s a taxonomic quandary of some kind around this possum. You can read a bit about it at the Australian Museum’s website, but I’m not going to get sucked in. Basically, I just blindly draw the mammals listed in the Smithsonian’s Mammal Species of the World, and that’s that.

Speaking of that list, finding the link to it just now has alerted me that the website has been updated and now has a searchable database. I’ve been working off the spreadsheet they used to have available for download. Now I’ll have to decide whether or not to merge my old list with the new. You think that you can just say, “I know what would be neat—I’m going to draw all the mammals in the world!” But it turns out to be much more complicated than that.

Finally, I picked this possum out of my copy of Furred Animals of Australia, published in the United States in 1947, a book that I’ve referred to often in the past but haven’t thought much about. This time, I decided to Google the author, Ellis Troughton, wondering if he might be a naturalist of the adventurous, tall-tale variety. I don’t think he is, necessarily, but I did learn that he served in World War I in France from 1916 to 1919, and that during World War II he investigated scrub typhus in New Guinea. (I’m not entirely sure what the implications of that fact are.) He was the Australian Mammal Society’s first Honorary Life Member. (Is that a society of mammals? Aren’t they all?) And most perplexing of all, I found a solitary reference, in an interview with a physiologist conducted by the Australian Academy of Science, to Ellis Troughton being nicknamed “Naughty Troughty,” which I guess might rhyme in Australia. Why was he called that? I have no idea. I wish I did, though.

These bits of information inspired me to go through the introductory and…stuff-at-the-end material of Furred Animals of Australia in a quest for more about Mr. Troughton. (What is the word for stuff in the front and back of a book that isn’t the main part of the book? I can’t think of it.) I found, in the back, “Collecting Hints,” in which Mr. Troughton tells us how to preserve the small animals that we may injure in clearing timber or that our cat might bring in. He advises that “every effort should be made to preserve any small mammals accidentally killed about homesteads…The presentation of such specimens to the local museums represents a very material contribution to the knowledge of our unique Australian fauna of mammals.” Even if you’re not in Australia, something to consider, yes?

In the front of the book, Mr. Troughton reprints “A Creed for Nature Lovers” from a 1936 issue of The Australian Museum Magazine, and it’s lovely. It includes “I believe: That we should not harm living things that are harmless to us, as we hope to avoid harmful things ourselves; that even harmful creatures should be controlled with due regard for their zoological heritage and right to survive.” Words to live by, and something I wish I could get my kids to understand when they want to smash every spider that gets into the house.

Speaking of children, in his introduction to the book, Mr. Troughton says:

“Pleading protection’s cause in museum lectures for school children, I have reminded them of Barrie’s Peter Pan, and his friendly fairy kept alive only by the children’s belief in such quaint things. These children will be the grown-ups of to-morrow and both young and old must put their united influence behind any sound movement for the protection of wild life…

“Only by such universal belief in their right to existence can we ensure the survival of most of the fascinating creatures for the delight and instruction of future generations; so that, in the spirit of Kipling’s beautiful ‘L’Envoi’:

Each for the joy of the working,
And each in his separate star,
Shall draw the thing as he sees it,
For the God of things as they are.”

Thanks for joining me while I draw the mammals as I see them.