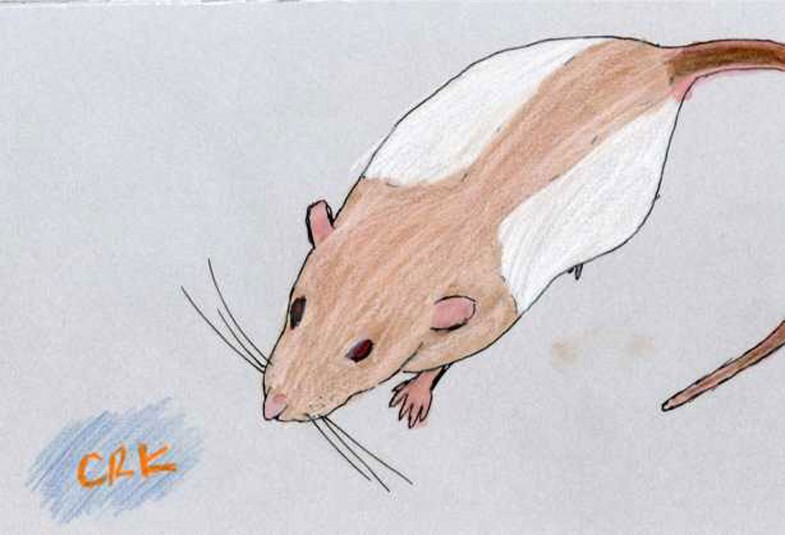 Hello everybody!!! Today I drew a rat! Here is some information about them. I hope you enjoy!

If you have rats in your house they are either pets or pests right? Well in my case they are pets! And I know one thing for a fact!! People say they are disgusting, evil, little biters! Even if they have red eyes that does NOT mean that they are evil! And they groom themselves for most of the day so they are very clean (Even in the wild!) not disgusting. And they only bite if they are really scared because they think you are going to hurt them or because they mistake the smell on your finger for food! Even then when they realize it’s a finger they are biting they let go right away!

Yes it is true that they have diseases in the wild and they can give them to you if they bite you! But that isn’t very likely!! I know that lots of people think of rats as pests but they aren’t. You might think of them as pests but the only reason they come to live in your house is because they are going to freeze to death outside! Wouldn’t you try to find a warm home if you were about to freeze to death or would you just let yourself die? No, you would fight right? That’s exactly there intention!

It is true that they brought the bubonic plague (black death) to Europe in 1348 but you can’t blame them for killing lots of people! That’s like if your kid gets sick and  gives it to you. It’s not the kid’s fault that he/she got sick or that he/she gave it to you right? And the rats aren’t even the ones that gave the black death to people! The fleas that were on the rats gave it to the people. So PLEASE don’t blame it on the rats!

Rats are the perfect pets for me and may be for you too!! They are very much like the dog which many of you have as pets and never want them to go away right? The only differences are that the have less hair on their tail, they are small and sometimes live in cages and that’s about it!I don’t know who or why some people hate rats so much but they shouldn’t.

I have a rat named Whoie and he is just as sweet as my dogs!! Maybe even sweeter because Whoie is specifically my rat! And I feed him  every day play with him, clean his cage, and even share my thoughts and feelings with him!! Would you call that evil? NO!! And there aren’t any excuses except for my eyes are lying but that’s a REALLY bad excuse! If you get a rat as a pet and still hate them you’re just plain old CRAZY!  So stop all of those nonsense thoughts about them!! Please! They eat seeds, fruits and vegetables not people’s fingers!