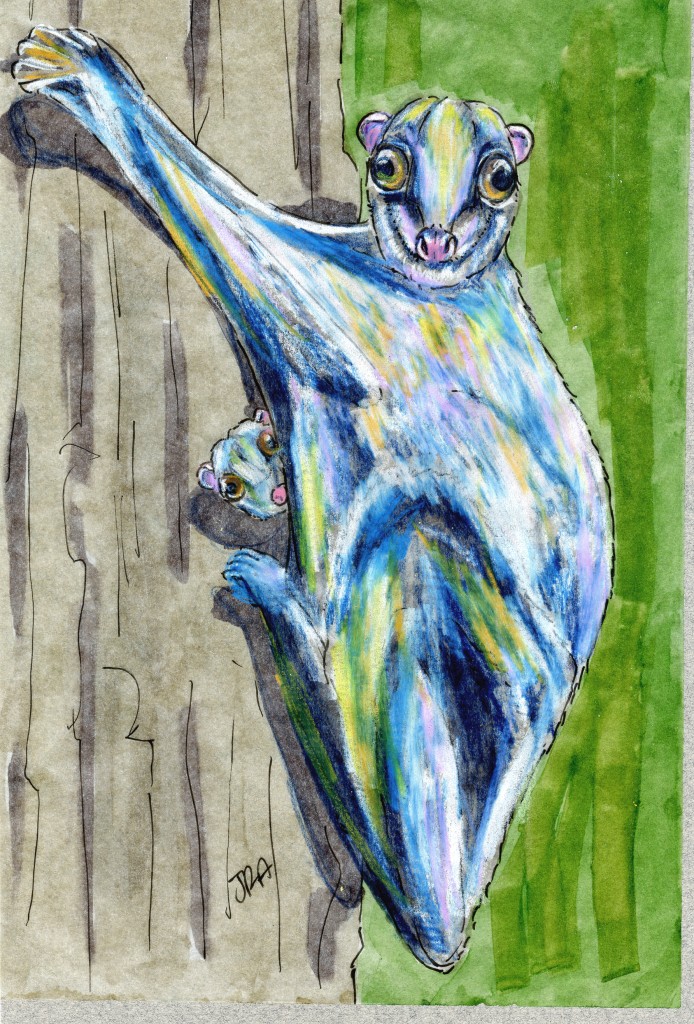 Here’s another order checked off the list. I think this is a goal we’ll reach, mammals! And what a mammal this one is. Have you ever heard of flying lemurs, also called colugos? There are two species, one that lives in the Philippines and one that lives in Thailand, Malaysia, Sumatra, Java, Borneo, and the like. Both species have this amazing membrane that stretches from their neck…to the tips of their fingers…to the tips of their toes…to the tip of their tail. Compare that to the flying squirrel, who has skin for gliding just between, basically, its wrists and ankles. It’s amazing, this colugo membrane.

Colugos flip their tail up, sort of inside out, when they’re on the go so it doesn’t get “soiled,” according to Walker’s Mammals of the World, or caught on a branch. They’re truly arboreal, and they freak out if they somehow end up on the ground. They can climb in “a series of lurches” and they shuttle along horizontal branches hanging the way sloths do. But their most impressive mode of locomotion is their gliding. In a single glide, they can travel upwards of 100 meters (109 yards)!

These guys eat almost nothing but greenery. Walker’s also says that “the gliding membrane of the mother can be folded into a soft, warm pouch to hold the young,” and “the mother may leave the young in a nest tree or carry it with her while foraging,” as you see this lady colugo doing. And colugos are crepuscular, a lovely word meaning “active at twilight.” I wonder if there’s an equivalent word that means “active at dawn.”

Finally, please click to enlarge this photograph of a colugo in flight, which is from Pennsylvania State University. It’s so amazing! The Daily Telegraph: ‘Your cousin, the ‘flying lemur'”