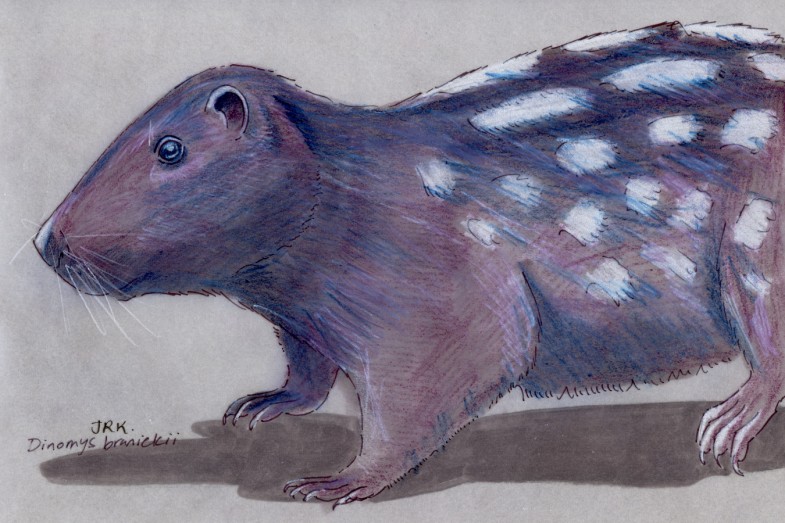 The pacarana is one of the largest rodents, weighing up to 33 pounds (15 kilograms). It lives in South America, and it’s pretty mysterious. It wasn’t discovered by science until 1872, and according to my pacarana Safari Card, “No more was heard of it for some 25 years.” The IUCN lists it as vulnerable because its numbers appear to be declining. It’s the only existing member of the family Dinomyidae.

The pacarana’s scientific name is interesting. Dinomys means terrible mouse, but pacaranas turned out to be tame in captivity, and actually, they’re not mice, either. The branickii species name comes from Hieronim Florian Radziwill Konstanty, Count Branicki (1823–1884), a rich Polish nobleman who seems to have been a patron of the zoologist who first described the pacarana. In 1959, Jackie Kennedy’s younger sister Lee married a Polish prince, Stanisław Albrecht Radziwiłł, who I believe was probably somehow related to the count. (I will do a lot of things in the service of the Daily Mammal, but today, researching the pedigrees of Polish nobility in depth is not one of them. Wikipedia’s list of the members of the Radziwiłł clan, however, does promise to lead interested readers down some fascinating rabbit holes. I would start with “Catherine Radziwill (1858–1941), a Polish princess, stalked and ruined the career of Cecil Rhodes.”)