Just a few more days until Mammalthon 2, which is this Saturday, April 19! Look over there to the right to learn all about it. See you then! 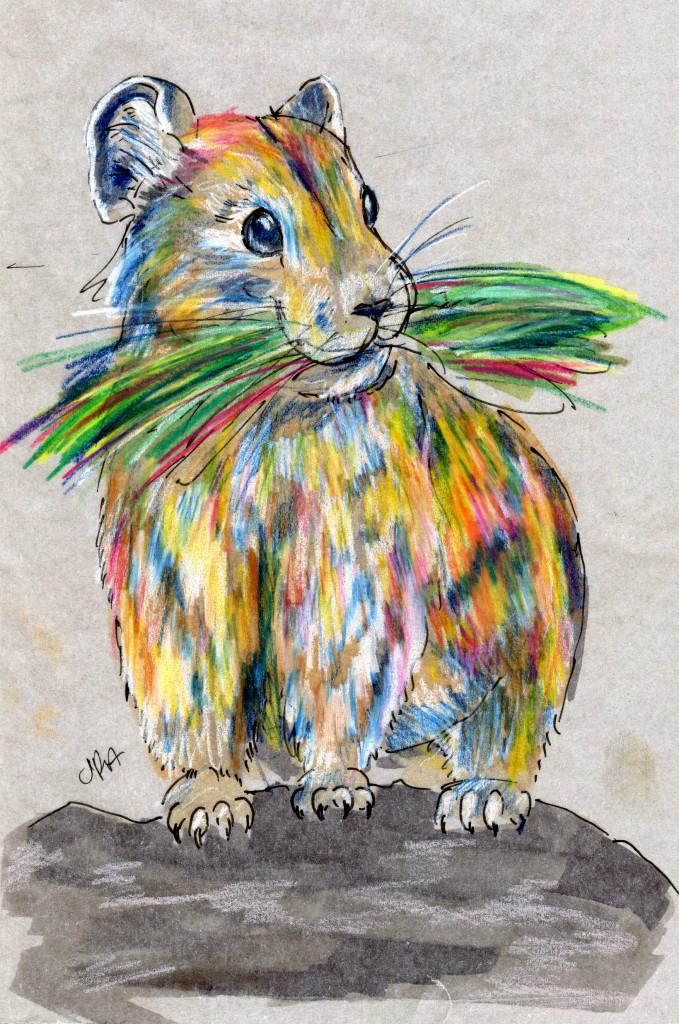 To gear up for this weekend’s 24 Mammals in 24 Hours drawing marathon, I’m featuring the mammals of New Mexico this week! The Wildlife Center, a wildlife hospital in northern New Mexico, will be receiving all the proceeds from the mammalthon, so what better way to honor their work than by meeting a few of New Mexico’s mammals?

This is an American pika. It’s related to rabbits, and it does kind of look like a short-eared rabbit. It’s tiny, though, the size of a tennis ball, or so I read. It makes a great little noise that sounds like it’s saying “Eep!” It lives in the mountains of western North America, in piles of talus, which is the rubbly rock that you can find on mountain peaks.

You probably noticed that this particular pika has a mouthful of greenery. Pikas don’t hibernate. Instead, they spend the summer gathering grass, which they pile up and dry to create stacks of hay! All winter long, they eat the hay they made and huddle under the snow, which insulates them from cold temperatures.

That’s part of the problem now facing pika populations. In addition to needing insulation from extreme cold, pikas have such thick coats—which they don’t shed—that they die in temperatures higher than the mid-70s Fahrenheit. Therefore, they’re confined to high elevations. But we’re undergoing something known as global warming these days, and that has two implications for pikas. First of all, they have to go higher and higher to find temperatures cool enough for them to survive. Second, the higher temperatures also mean less snow cover, and the pikas don’t have any insulation from freezing.

Scientists are finding many empty colonies where they expected to find lively pika populations. In some of them, there are hay piles left half eaten.