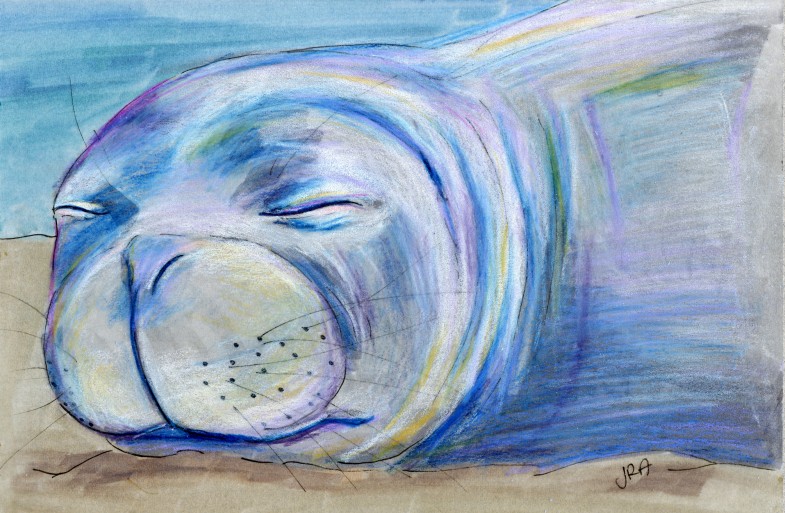 To celebrate the inauguration of President Barack Obama in a week, let’s meet some mammals of Hawaii, where Obama grew up.

Hawaii’s status as a volcanic island chain means any species there—of fish, lizards, trees, whatever—had to arrive there from somewhere else at some point. As far as I can ascertain, only one land mammal can call itself a native Hawaiian, and we’ll meet it tomorrow. Today, say hello to the Hawaiian monk seal, one of two mammals found on Hawaii and nowhere else.

The monk seal gets its name because of its solitary nature. The Hawaiian monk seal is now confined almost exclusively to the Leeward Islands, where the Polynesians never really settled. This endangered mammal just doesn’t do well with encroaching humans—who does, right? When a pregnant Hawaiian monk seal is annoyed by humans and their dogs, she’ll move somewhere else to give birth, and that somewhere else is often not a very good place to raise a baby. Humans’ fishing activities make it harder for the monk seals to find fish to eat, and they can get entangled in fishing nets and drown, too.

Mother Hawaiian monk seals stay with their babies for about six weeks after giving birth. During these weeks, the mother seals stop eating, losing a couple hundred pounds. (I can see the magazine covers now: “The Hawaiian Monk Seal Diet: From Baby Bump to Beach Body in Six Weeks!”) Most seals live in colder climates, and the Hawaiian monk seal doesn’t seem to have any adaptations for its tropical home. In fact, it has the same amount of blubber as polar seals. In the hottest part of the day, it hauls itself onto the beach to take a nap in wet sand, like the seal in this picture, or in the shade. (I hope the endangered-species policies of the new administration will help them sleep a little better.)

According to Walker’s Mammals of the World, “during the spring and summer adult males cruise constantly along favorite basking beaches in search of receptive females.” Sounds like humans!