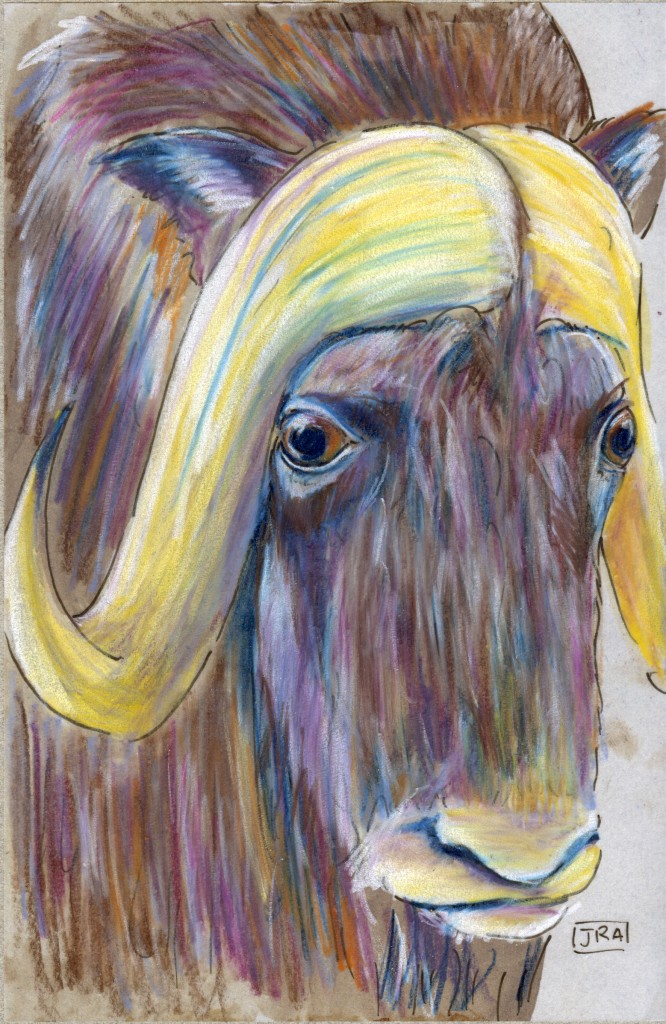 To honor (if that’s the word) Sarah Palin’s stepping down as governor as Alaska, let’s meet some of the mammals of the 49th state. (Because yesterday’s beluga whale lives in Alaska, I took the liberty of retroactively including it in this theme week, which I only just thought of.)

The muskox’s scientific name means “musky sheep-cow.” DNA analysis suggests that it’s more closely related to the goat family than to sheep or cows, and it doesn’t have musk, per se, but it does have rather pungent urine that it uses in various intimidating ways.

Muskoxen are native to Alaska, Greenland, and Canada, but they became extinct in Alaska in the 1800s. In the 1930s, 34 muskoxen from Greenland were reintroduced to the then-territory, and now there are some 2,000 living in the state. They’ve been introduced to Svalbard, Russia, and parts of Scandinavia, too.

The muskox has two coats, an outer one called guard hairs and an incredibly warm, downy undercoat called qiviut. And yes, that is an acceptable Scrabble word! Pronounced kiv-ee-yute, qiviut is several times warmer than sheep’s wool and softer than cashmere. As you can imagine, that means it’s very luxurious and expensive. (If anyone wants to send me a qiviut scarf, I won’t complain!)

Qiviut is one of the muskox’s very effective Arctic adaptations; others include short legs and a lot of body fat. Those short legs and fatty bodies mean that muskoxen can’t run very fast for very long, so when they’re threatened, a herd of muskoxen will line up facing their predator, showing their fearsome horns and keeping their calves behind them. If the predators come from multiple directions, the muskoxen form a circle with the babies in the middle.